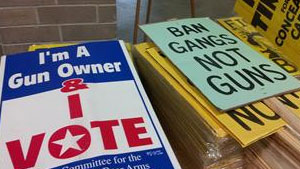 Those participating in the annual gun owners lobby day, sponsored by the Illinois State Rifle Association, planned to flood legislative offices and convince Illinois lawmakers to approve concealed carry and defeat what they call anti-gun legislation like the proposed bullet tax. ISRA is a gun rights advocacy organization.

The concealed carry proposal, House Bill 5745, would allow gun owners to obtain a license from their local sheriff, complete a training program and then carry a pistol. That legislation passed the House Agriculture and Conservation Committee on Tuesday.

The bullet tax in House Bill 5167 would levy a 2-percent surcharge on all ammunition sales. A pack of 20 hunting rifle bullets, for example, which costs $14, would generate 28 cents in tax revenue. The House Executive Committee approved the bill last week.

Larry Waugh, who made the trip here from Waterloo in southern Illinois, said Chicago lawmakers have held up the concealed carry bill for the rest of the state.

"I'm getting a little tired of the Legislature carrying on the way they're carrying on," Waugh said. "Forty-nine other states have concealed carry. What are we? Felons? What's going on?"

Wisconsin last year became the 49th state to allow gun owners to carry a pistol in some form. Some states allow gun owners to wear a gun on their hip or in the open, while others allow for only concealed weapons, said Richard Pearson, ISRA executive director.

Waugh said he's owned guns his whole life, but this is the first time he has become politically active about concealed carry.

Lad Tucker, of Moline, also made his first trip to the Capitol as part of this year's rally. Tucker said he carries a gun, but only when he drives across the Mississippi River into Iowa.

"I live five minutes from Iowa, and I have a non-resident permit (there), and I carry every day," Tucker said. "They trust me, but my own home state doesn't."

Tucker said if Illinois lawmakers see just how many gun owners support concealed carry, then maybe the legislation can make it through the General Assembly.

The large number of gun owners wearing gold T-shirts choked the statehouse, making it difficult for anyone to walk in the hallways.

With lawmakers who support concealed carry, gun owners found either a smile and a handshake or a petition to sign. State Rep. Jil Tracey, R-Quincy, said that face-to-face interaction will make a difference when it comes time to vote on concealed carry.

"I probably get more contacts on this issue than any other," Tracy said. "It's very import to people, for them to take the time to contact their legislators and come here to Springfield."

"People feel that (concealed carry) is their universal right that has been affirmed by the Supreme Court, but until we address compelling crime prevention issues in Chicago and suburban Cook County I do not believe it's the right policy for the state of Illinois."

Zalewski said unless concealed carry supporters are willing to compromise with Chicago-area lawmakers, he doesn't believe the legislation will pass.