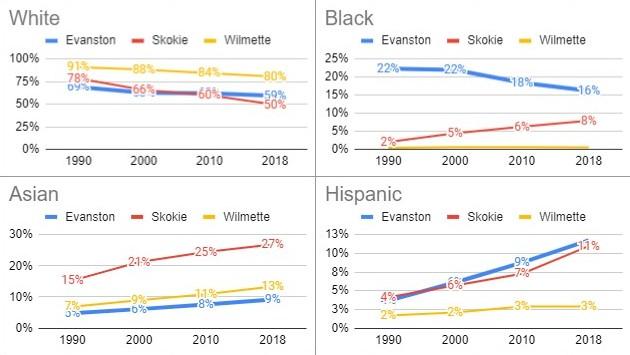 I am a reparations skeptic.

Leading justifications for Evanston to provide reparations include that blacks have been priced out of their homes and that they have been victims of housing discrimination and as a result are being forced to move out of the community.

But being priced out is a problem for all Evanstonians—not just blacks.

Evanston doesn’t have the commercial property tax base of neighboring communities resulting in higher property taxes for comparable homes.

Underfunded public safety pensions place a significant property tax burden on Evanston’s residents.  Increasing property taxes have suppressed property values. According to Zillow, the average Evanston home has increased in value by 0.1% per year since 2010 while inflation has averaged 2% per year.

And city property taxes continue to increase — up more than 5% for taxes payable last year.

This impacts all Evanstonians and doesn’t single out any ward or race..

Poverty rates in Evanston (US Census) are 18.4% black, 9.03% white, 19.77% Hispanic and 24.19% Asian. In a society that preaches equity, how would awarding marijuana tax revenue to one group prove to be equitable when there are other groups with even higher poverty rates?  Shouldn’t Evanston offer a helping hand to all in need—regardless of race, creed, gender or color? Aren’t the poor of Evanston all impacted by the high cost of living in Evanston?

Those supporting reparations also seem to ignore that blacks have held top-level leadership positions in Evanston for years. District 65 will soon have Devon Horton as superintendent and had Hardy Murphy as superintendent for 13 years. Demitrous Cook is our police chief, and Lorraine Morton was mayor for 16 years.

The City of Evanston’s employee profile is 23.51% black, 61% white, 9.95% Hispanic and 4.14% Asian. This hardly seems consistent with a claims of widespread discriminates against blacks here.

Redlining was outlawed in 1968 with the passage of the Fair Housing Act of 1968.  Penalties for violating the act can exceed $100,000. To discuss redlining, we must be prepared to discuss how Chinese were redlined in San Francisco, how Jews were barred from buying houses on the North Shore and how the the Irish and Italians were not viewed as desirable compared to other Europeans throughout the United States.

It appears the most recent litigation against Evanston real estate brokers for racial steering occurred in 1989.

And what about the Community Reinvestment Act of 1977 that ended discrimination in lending to low and moderate income neighborhoods? What about the Equal Credit Opportunity Act of 1974 that makes it unlawful for any creditor to discriminate against any applicant, with respect to any aspect of a credit transaction, on the basis of race, color, religion, national origin, sex, marital status, or age?

Evanston’s mission statement, “The City of Evanston is committed to promoting the highest quality of life for all residents by providing fiscally sound, responsive municipal services and delivering those services equitably, professionally, and with the highest degree of integrity.”  How does reparations for one race of people fit the mission statement?

The $10 million from the marijuana tax proposed to fund reparations is a lot of money. It would fund the nearly closed Firehouse 4 for eight years. It would nearly fund the taxpayer’s Evanston police pension annual obligation. Maybe that’s where the marijuana tax revenue should be directed.

Knowing that debt/pensions consume 32% of governmental expenditures why would the City of Evanston allocate funds that targets a specific color of skin when Evanston has much higher obligations to the community?

Responsible governance funds pensions and maintains police and fire protection. It serves the needs of its’ community in an impartial manner. Reparations will only succeed in dividing our diverse community, trigger unnecessary litigation and continue to strain our taxpayers.  The marijuana tax (as in all tax revenue) needs to be directed to serve the needs of the city and all its residents.

John Foley is an Evanston resident.

Evanston Now welcomes a wide range of views on local issues. Contact viewpoint@evanstonnow.com if you with to submit a letter to the editor or propose an opinion column.