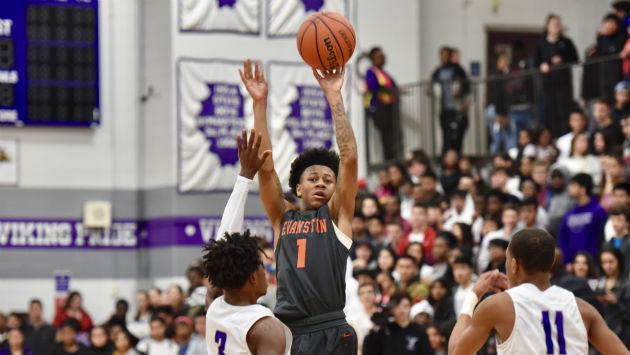 Only the tough teams will survive the grind of the Central Suburban League South division basketball race this year, with at least four teams capable of putting together 20-win seasons.

Evanston struggled in that department in its biggest road test to date Friday night in Skokie.

In front of a near capacity crowd, the Wildkits didn’t put up much of a fight in the second half of a 64-52 loss to conference favorite Niles North. The visitors shot only 31 percent from the field, turned the ball over a season-worst 27 times and fell to 6-2 overall on the year, 2-1 in conference play.

The visitors scored just 5 field goals in the second half against the unbeaten Vikings after leading 28-26 at halftime. Niles North (8-0) caught fire in the third quarter and poured in 22 points in the period due mostly to careless ballhandling by ETHS.

That’s the last thing Evanston head coach Mike Ellis expected against a Viking team that will never be known for its defense. 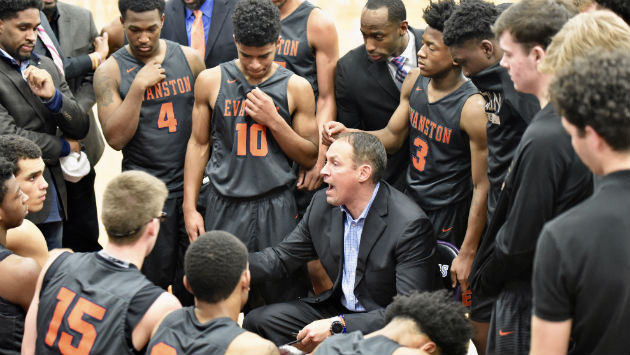 Evanston coach Mike Ellis tries to find answers in the second half of a 64-52 loss to Niles North Friday night.

“Our three junior guards — Lance Jones, Jaheim Holden and Ryan Bost — turned the ball over 14 times between them,” Ellis said. “We can’t be a team that turns the ball over 27 times in a game when we’re playing 4 guards at a time. There was a lack of leadership and a lack of toughness. Our mantra is always to play better in the second half as a team than we do in the first half, and we didn’t do that tonight.

“Niles North played harder and they played tougher. That’s how you double up an opposing team on the offensive boards (18-8). They took 7 charges and we took 1. Those are toughness stats, and they beat us in every single category when it came to toughness.”

North’s Damaria Franklin led all scorers with 25 points — needing 23 field goal attempts to reach that figure — and Demarion Bariffe-Smith (11) and Aquan Smart (10) also scored in double figures for the winners, who handed ETHS its first conference loss in more than two years.

Evanston freshman Blake Peters scored his first career double-double, leading the Kits with 16 points and 10 rebounds. Next best for ETHS were Jones with 9 points and Holden and Matt Hall with 8 apiece.

Jones was on the bench for much of the first half after picking up two quick personal fouls, but the Wildkits were able to maintain their advantage after jumping out to a 13-5 first quarter lead on the cold-shooting (2-for-12) hosts. 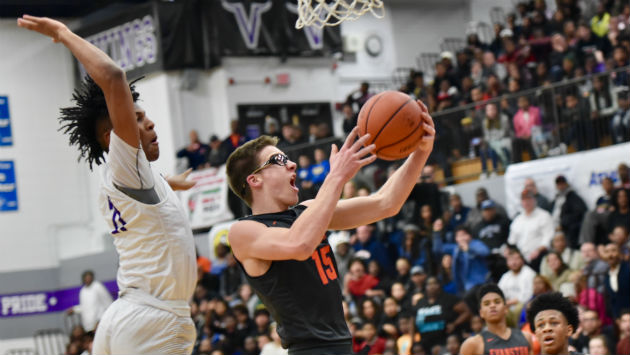 Freshman Blake Peters of Evanston drives to the basket against Niles North’s Aquan Smart. Peters earned his first career double-double with 16 points and 10 rebounds in the loss to the Vikings.

Evanston still led 28-26 after North closed out the half with four points in the last 42 seconds — turnovers led to all four free throws — and it was all downhill after that for the Kits.

“Give Niles North credit because they survived that quick run on our part to start the game,” Ellis said. “I don’t know if we relaxed or thought it would be that easy after the first quarter. We rested on what we did in the first half, and they came out and took it to us in that third quarter.”

Down by double digits in the fourth period, the Wildkits tried to mount a comeback as Jones netted two free throws and a bucket to cut the deficit to 57-51. But Smart answered with a transition score, and Jones was whistled for an offensive foul with 1:30 remaining, a call that also negated a layup by the junior.
The Wildkits are on the road again Saturday night at St. Joseph.