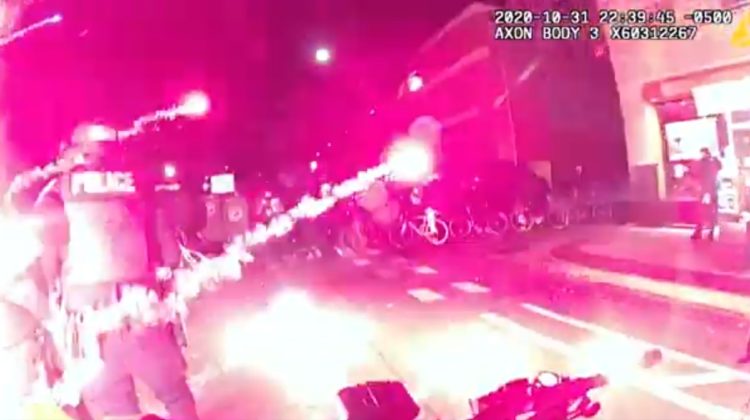 A still frame from a police body camera video that Evanston officials say shows protesters throwing fireworks at police during a defund police demonstration on Halloween.

Evanston Police Chief Demitrous Cook told WLS Television that some people in the crowd started to throw “super-powerful” firecrackers at officers. Some officers, he said were injured when they “caught a little of the fireworks in their face.” Demonstrators, the chief said, also pointed green lasers at officers’ eyes.

In a news release issued this afternoon, city officials said some protestors also threw rocks and bricks at police and unfurled umbrellas to shield demonstrators who were spraying graffiti on streets, stop signs and electric boxes.

Police from several neighboring departments were called in to assist Evanston officers in responding to the violence. One of those officers was transported to a hospital for treatment of an eye injury from fireworks.

Cook told WBBM television, that after the violence, police had “to send a message that we’re not going to let people come in here and tear up the City of Evanston.”

The city news release said officers used pepper spray to prevent injury to bystanders and police, but denied claims by protestors that tear gas was used — and said any smoke seen was from fireworks used by the protesters.

One downtown resident told Evanston Now’s Jeff Hirsh he’d been assaulted by a person he believed to be one of the protesters as he walked from the Metra station to Chicago Avenue late Saturday evening.

The protest, which had initially begun peacefully, reportedly involved around 100 people.

Organizers of the demonstration said they’re planning another protest for this afternoon at the university library.

NU spokesman Jon Yates issued a statement saying the school “strongly supports the free expression of ideas and vigorous debate … but we do not condone breaking the law.”

“Should members of the Northwestern community be found in violation of University policies, state or federal laws,” Yates added, “they will be held accountable through our processes.”