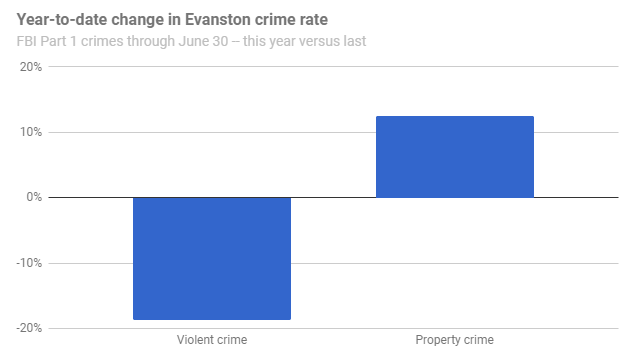 Halfway through the year, violent crime in Evanston is down nearly 19 percent from 2016 levels, but property crimes have increased by 12.5 percent.

Figures provided by the Evanston Police Department show that for the four categories of part one violent crimes reported to the Federal Bureau of Investigation:

But the overall number of part one property crimes has gone up:

Police Cmdr. Joseph Dugan said the reduction in violent crime is attributable at least in part to increased police efforts to get guns off the streets.

He noted that in recent days, following a shots fired incident in the 1800 block of Laurel Avenue, officers were deployed into the area and Wednesday night were able to stop a vehicle and recover a loaded stolen handgun from the driver.

It was one of at least eight guns police took off the streets this month.

Dugan notes that the majority of burglaries to garages and thefts from cars involve situations where the owners have left doors unlocked.