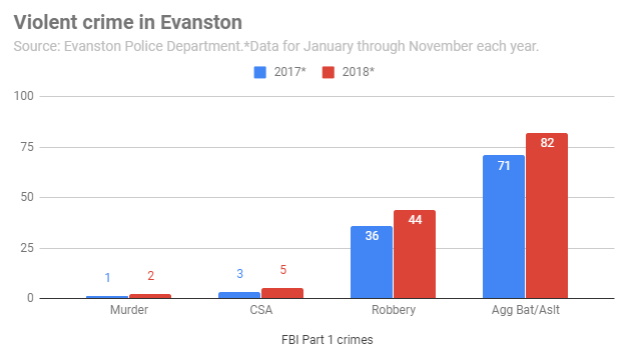 Violent crime increased nearly 20 percent in Evanston during the first 11 months of 2018, but property crime declined by a little more than 9 percent.

Since property crimes occur much more frequently, the overall total of FBI Part 1 crimes reported by the Evanston Police Department declined by 7.3 percent during the period.

All four categories of violent crimes tracked by the Federal Bureau of Investigation — murder, criminal sexual assault, robbery and aggravated assault and battery — ticked up in Evanston last year, while all four categories of property crime included in the index — burglary, theft, motor vehicle theft and arson — declined.

Responding to the increase in violent crime presumably will be one of the top items on the agenda for Demitrous Cook, who was sworn in as Evanston’s new police chief last week.

Over the longer term, Evanston has shown a substantial reduction in violent crime, compared to national averages compiled by the FBI.

And Evanston’s violent crime rate was already lower than the national average at the start of the period.