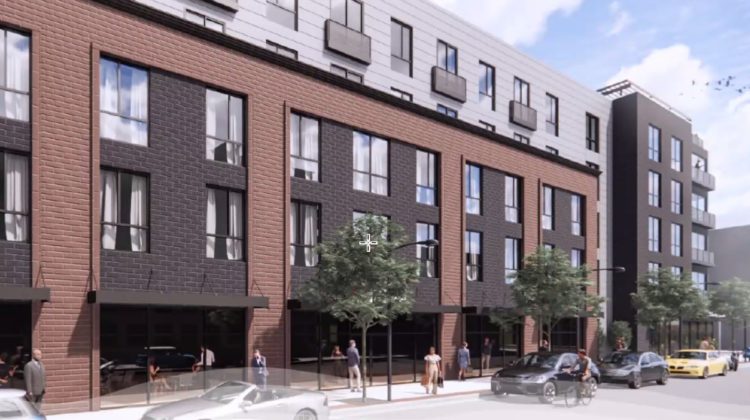 A rendering of the planned 718 Main development looking southwest.

It appears the proposed planned development on the Vogue Fabrics property on Main Street won’t include a walkway to the parking lot behind neighboring stores after all.

At the city’s Design and Project Review Committee meeting Wednesday afternoon, Shaun Chinsky, who owns the neighboring building to the east, said he’d rather not have the walkway.

Chinsky said the lot behind his stores had been leased as public parking until last June, but is no longer available for that use.

A pedestrian pathway would just send people walking down the alley and create sound issues for people living in the new building, with voices echoing up from the walkway. He also said he feared that it would create nuisance and safety issues.

The developers of the five-story, 120-unit Vogue project at 718 Main St. said they’d included the walkway at the suggestion of city officials and the city’s community development director, Johanna Nyden, said to the developers, “I think you’ve just gotten some more land to work with.”

Charles Davidson, representing developer Catapult Real Estate Solutions, said the project would include extending the city’s planned Main Street streetscape update around the corner onto the Sherman Avenue frontage of the site and said they would present some suggestions for upgrading the alley behind the property.

Several neighbors expressed concern about the height of the building and traffic and alley access issues.

Jeff Harlow, who lives across the alley from the site, said the new building would “screw existing residents” and make it very difficult to enter or exit his garage.

Jeff Stumpf who lives in a Sherman Avenue townhouse that adjoins the Vogue property said the height of the building would cause a significant loss of natural light and privacy in his yard “with all those balconies overlooking us.”

The committee postponed a decision on a recommendation regarding the project until its next meeting on Nov. 11.