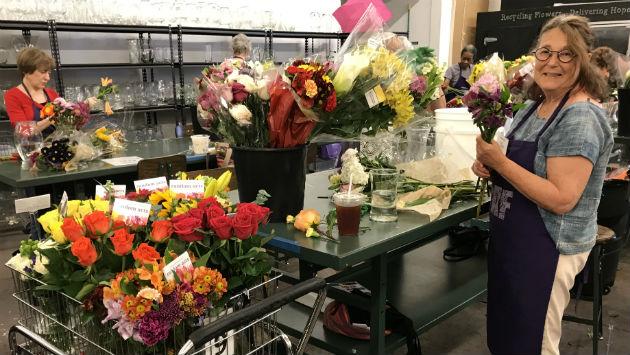 A meticulously organized team of volunteers in Evanston is recycling thousands of flowers from the International Floriculture Expo into arrangements for local nursing home residents.

Sydney Werd, program director of the Random Acts of Flowers Chicago branch in Evanston, arranged for seven pallets of flowers to be picked up on Wednesday at McCormick Place and unloaded at the RAF location on Greenleaf Street in Evanston.

This morning about 30 volunteers started a process called “chop and drop,” in which damaged petals are removed, leaves are stripped from the lower part of the stem, stems are cut to the same length and the arrangement is dropped into a vase of water.

The vases are then placed on carts that will be loaded onto vans and taken to local nursing homes and hospitals where volunteers will deliver bouquets room-by-room on Monday.

Deliveries will be made to Aperion Care of Evanston, Presence St. Francis Hospital and DaVita Dialysis as well as other locations throughout Chicago and the northern suburbs.

While recycling flowers from the flower show is a larger operation than usual, Random Acts of Flowers collects, prepares, arranges and delivers flowers all year.

“We collect flowers from wholesalers, such as the Fulton Market,” says Werd, as well as  flowers from weddings, events, funeral homes and even grocery stores, which can’t sell flowers after about five days.

Jill Mueller has been volunteering with RAF for four years.

Volunteers pick up the flowers on Monday morning, Werd explains, and preps them on Monday afternoon. On Tuesday morning a team creates anywhere from 100 to 300 arrangements, depending on how many flowers are collected, which are delivered on Tuesday afternoon. The cycle repeats again on Wednesday and Thursday.

The group is always looking for volunteers or donations on its website.