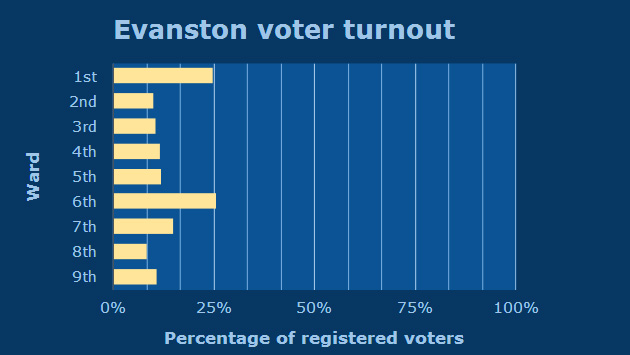 With no mayoral contest at the top of the ballot, voters in Evanston today stayed away from the polls in droves.

Only a little more than half as many voters turned out this year as in 2009 when there was a four-way race for mayor.

Voter turnout citywide was only about 13 percent today, and as the chart shows, it reached a relatively robust 25 percent only in the 1st and 6th wards, where challengers to the incumbent aldermen were on the election ballot.

Alderman Ann Rainey, 8th Ward, the council's longest-serving member, said, "It breaks my heart that people can't come out and do something so easy as to vote."

Without the hotly-contested Evanston Township High School board election, Rainey added, "there probably would have been only 50 people voting in my ward." As it was, just over 400 turned out

She said she could understand why there might be apathy in some better-off wards, like the 7th.

But she said that it didn't make sense in wards with more economic challenges, like the 2nd, 5th and 8th.

"And I don't believe that apathy indicates satisfaction," Rainey added.

In some wards where aldermen faced no challenger as many as 20 percent of voters either cast their ballot for a write-in, or, more likely, showed their lack of enthusiasm for the incumbent by not bothering to cast a vote in that race.