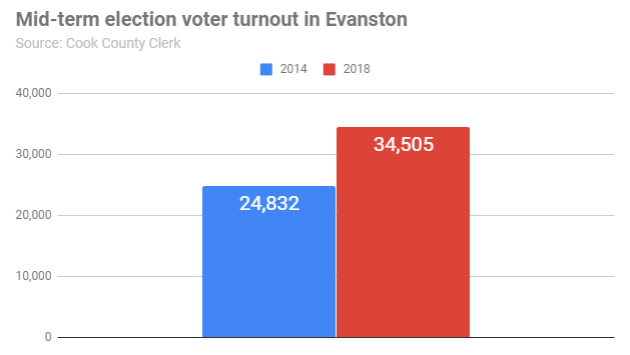 Voter turnout soared in Evanston for Tuesday’s mid-term general election — up nearly 39 percent from what it had been in 2014.

That was a substantially bigger increase than for suburban Cook County as a whole, which saw a turnout gain of nearly 23 percent.

The big turnout led to long delays at some polling places — notably at Parkes Hall, behind Alice Millar Chapel on the Northwestern University campus.

There it took until well after 8 p.m. — more than an hour after the scheduled closing of the polls — for all the voters in line to cast their ballots.

Evanston Democratic Committeeman Eamon Kelly said the delays were caused in part by students making use of the state’s new option to register and vote on the same day.

“I can finally pass bills that are a little controversial and not have to worry about the governor vetoing them,” Gabel added. “Before, if I didn’t have enough votes to override it wasn’t even worth it” to try.

Under Gov. Bruce Rauner, she added, agencies that served people with disabilities and children were forced to close. “We are going to be able to provide a better life for the people of Illinois under J.B. Pritzker.”

In Washington, despite the Democrats winning control of the House, “We may not be able to get everything done at the federal level,” she said, “But Illinois can lead the way” toward change nationally in 2020.