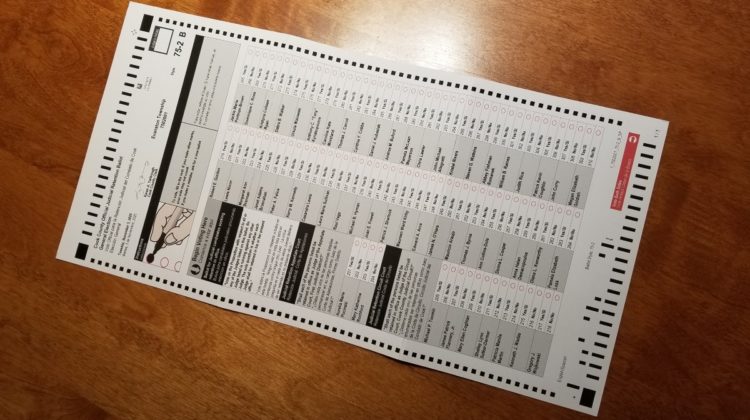 The front of the judicial retention ballot. There's more names on the back.

They are no doubt household names in their own households, but the 60 men and women trying to keep their jobs as Cook County Circuit Court Judges this November would be hard for even the most conscientious voter to identify.

Yet under Illinois’ system of judicial retention elections, voters are asked to give thumbs up or thumbs down to a bafflingly long list of candidates.

“I know a lot of voters find the judicial retention portion of our ballot to be overwhelming,” says Jay Young, executive director of the good government group Common Cause. Unless people take the time and effort to educate themselves, Young says, “I can’t imagine that everyone looking at a ballot will feel comfortable making decisions on who to retain.”

Circuit court judges are first chosen in a partisan election (in theory, anyway. More on that later). Then, under a system in place since the 1960s, a seated judge runs again in a non-partisan race, not against another candidate, but for “retention.” Voters say “yes” or “no” to each individual for another six year term. Retention requires a 60 per cent “yes” vote, but only a handful of judges ever get tossed.

As you might imagine, voters don’t pay too much attention to judicial elections.

In the 2016 presidential election in Cook County, voter turnout was 72 per cent. But fewer than 50 per cent of registered voters continued down the ballot to vote for judges, even in a year when there were far fewer names than there are now.

Prof. Steven Lubet, of Northwestern University’s Pritzker School of Law is an expert on judicial election systems. As confusing as the long list of names can be, Lubet says retention is a “pretty good compromise.”

That’s because Cook County has 250 elected judges. And, Lubet says, if each one had to run against another for one judicial seat, you might have twice as many names on the ballot, making things even more confusing.

Plus, he says, judicial hopefuls do run against each other in the primaries. And in overwhelmingly Democratic Cook County, “the primary,” Lubet says, “is the election.” Many times, Republicans do not even put up a candidate for judicial vacancies in a head-to-head non-retention race in November.

Republicans do have a better chance in some judicial “subcircuits” in more GOP-friendly portions of the county. Subcircuits are smaller, non-countywide jurisdictions.

Common Cause points out there are several organizations which make recommendations in retention elections, such as Injustice Watch, Chicago Votes, and the Illinois State Bar Association. The bar suggests a “no” vote for only four of the 60 candidates on the ballot.

There is one judge on the retention ballot who voters might recognize, Michael Toomin. He’s the judge who appointed a special prosecutor to investigate the Kim Foxx/Jussie Smollett saga. Toomin was not endorsed by the Cook County Democratic Party.

Party leaders say they were not satisfied with how Toomin ran juvenile court as chief judge of that division. But Toomin’s backers say the un-endorsement was punishment for Toomin’s appointment of the special prosecutor, because County State’s Attorney Foxx is a Democrat.

Toomin’s name is first on the judicial retention ballot, but the Clerk’s Office says that has nothing to do with the Foxx/Smollett case. Rather, the names are listed by seniority on the bench, and with 40 years’ experience, Toomin goes first.

The Bar Association gives Toomin a “yes” for retention.