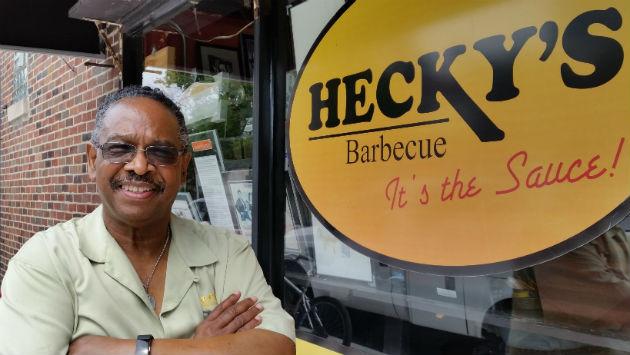 Long-time Evanston restaurant owner Hecky Powell says he’ll have to lay off three people next week as a result of the minimum wage increase that goes into effect on Saturday.

And Powell says he’s thinking about closing his restaurant at lunch time because of the wage hike — which would mean at least another four layoffs.

Powell, interviewed this noon at his Hecky’s Barbecue at 1902 Green Bay Road, says there’s a limit to how much he can raise prices — especially when he faces increasing competition from supermarkets and other chain retailers who’ve started offering prepared foods.

“Because they do volume, they can be cheaper,” Powell says.

And Powell says the type of people the city claims it wants to help most will be the ones hurt most by the wage hike.

Lunchtime isn’t the biggest sales time for his business, he says. “The reason I was open at lunch was because I was training a number of people then.”

“The city’s always talking about giving jobs to help out ex-offenders and all that,” he added. “I’ve been doing that for 33 years, and I haven’t gotten a dime from the city for it. I’ve been using my own resources.”

The untrained workers he hires now, at $8.75 an hour, 50-cents over the current minimum wage, aren’t worth even that, Powell says, until after they’ve been trained — a process he says can take as long as three to six months.

“I was telling Larry” Suffredin, the county commissioner who sponsored the minimum wage increase “why can’t you do this. Let me bring a person in at  $8.75, and then after three or six month, bump them up to a higher scale,” Powell said. “They should have to earn it.”

“When I send these people I’m going to have to lay off to Larry’s house and to [Mayor Steve] Hagerty’s house, and have them ask for jobs, we’ll see what they do for them,” he added.

Powell said that for most, the restaurant industry can’t provide what would really be a living wage. That’s why he says he can give workers a start and teach them some basic job skills — but after a couple of years they need to get out and get more training to move into a better career.

“You’ve got all those people packing that hall” at the Civic Center this morning, Powell said. “They’re saying this is for the minority community — but it’s 99 percent white liberals over there. They’re retired — so they could be there. If you’re going to have it on a Friday morning — every small business guy is working.”