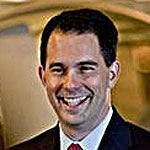 SPRINGFIELD — Wisconsin Gov. Scott Walker today visited a state he has used as a political punching bag to campaign ahead of a historic recall election in the Badger State.

SPRINGFIELD — Wisconsin Gov. Scott Walker today visited a state he has used as a political punching bag to campaign ahead of a historic recall election in the Badger State.

Walker spoke to a crowd of about 300 lobbyists, lawmakers and members of the business community at the President Abraham Lincoln Hotel and Conference Center.Walker’s speech was part of the Illinois Chamber of Commerce and National Federation of Independent Business lobby day here.

Walker’s visit comes less than two months before the embattled governor faces a recall election, spurred mostly by Act 10, a law passed during his administration that largely removes the ability of unions to use collective bargaining.

Walker said payment for his visit came from his political war chest.

Walker used the half-hour speech to highlight his fight against “a handful of big union bosses” and budgeting that allowed Wisconsin to dig itself out of a $3.6 billion deficit without increasing taxes.

Walker blamed the recall on “a handful of big union bosses (who) … think that I’m standing in the way of their power and their money.”

The temporary tax increases eliminated the state’s structural deficit, but they failed to address the state’s $8.5 billion backlog of overdue bills.

“There’s always been this false choice, between either raising taxes or cutting core services,” Walker said. “Who amongst you in business would say, ‘You know what, times are tough so I’m going to double the price of my product?’”

Quinn’s office had no official response to Walker’s visit, although the Illinois governor addressed the issue in a news conference Friday.

“I don’t know what he’s doing coming to Illinois. He has enough challenges in his own state. I don’t plan to go to Wisconsin anytime soon,” Quinn said.

Quinn used the opportunity today to raise money. His campaign sent an email asking for donations shortly after Walker visited.

“If you want a governor with a proven record of job creation, rather than just rhetoric, show your support for Governor Pat Quinn,” the email said.

Quinn and Walker have traded jabs since about the time Walker took office.

John McAdams a political science professor from Marquette University in Milwaukee, said Walker’s trip to Illinois offered a way to garner media coverage ahead of the June 5 recall election.

McAdams said Walker used his speech in Illinois in much the same way an environmental crusader would use a polluted river as backdrop for a news conference.

“This is the message that Walker’s people want Wisconsinites in general to get. Illinois is sort of a paradigm of what happens when you have a liberal governor that raises taxes to deal with a budget crisis,” McAdams said.

Illinois Chamber of Commerce President Doug Whitley said Walker was invited to the event because of his ability to cut Wisconsin’s deficit.

Walker’s visit to Illinois fell on the same day a pension-reform working group was to release recommendations for fixing the state’s public pension funds. The state’s pension system faces an $85 billion unfunded liability, and pension payments are eating up more and more state spending.

Recommendations, which could range from eliminating cost-of-living increases for retirees to asking current workers to pay more, now are expected to be released later this week, Quinn said in a news release.

Whitley said Walker’s visit wasn’t intended to be seen as an endorsement for eliminating collective bargaining for Illinois’ public unions.

“We brought him here strictly to talk about fiscal issues,” Whitley said.

“We sent a strong message to Illinois politicians that we won’t tolerate Walker-style attacks on the middle class, including the push to slash the modest pensions of teachers, police and other public employees,” said Anders Lindall, spokesman for the public union American Federation of State, County and Municipal Employees Council 31.

McAdams said Walker and his Democratic opponents are not talking about collective bargaining in the run-up to the special election.

“Clearly, Walker wants to run on his fiscal successes,” McAdams said. “Democrats, on the other hand, are pointing to things like reductions in state aid to education” made during Walker’s term.