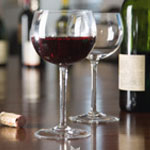 SPRINGFIELD — April Stanley thought her days of enjoying an occasional visit to the Shawnee Wine Trails were over — at least until next summer.

SPRINGFIELD — April Stanley thought her days of enjoying an occasional visit to the Shawnee Wine Trails were over — at least until next summer.

"I try to hit the wineries a couple times in the summer," Stanley said. "I never thought I'd be enjoying one in the middle of January."

A recent warm winter day had her driving from her home in Carbondale to Blue Sky Vineyards in Mankada.

"It was just so nice out on my friend's birthday," Stanley said. "We just wanted to be outside and do something fun."

Employees at Blue Sky said they are hearing similar stories from other visitors. Brandy Nance, director of marketing at the winery, said this time of year, normally the winery's off season, has been unusually busy.

"We're still seeing people coming from Paducah, St. Louis and other parts of Kentucky," Nance said. "And they're coming and sitting on the patio, which is unheard of for February."

Kirk Huettle, a meteorologist with the National Weather Service in Lincoln, said temperatures averaged 10 degrees warmer than normal during the first week of February. December and January were also warmer than normal.

"The last two months saw above average temps by 7 degrees," said Huettle said. "So far we haven't had to issue any winter storm warnings either, just advisories for when we saw an inch or 2 of snow."

This winter is Illinois's sixth warmest on record.

The unseasonably warm winter has contributed to an increase in tourism for December and January in Illinois, according to the most recent data from tourism offices statewide.

Some cities, such as Springfield, monitor the number of tourists differently, since they can count the number of visitors to tourist attractions in their community. Records from Springfield's director of tourism, Kim Rosendahl, show that Springfield saw a 24 percent increase this December over last December.

Visits to the majority of historical sites also were up this December, said Dave Blanchette, spokesman for the Illinois Historic Preservation Agency, which monitors historical sites and memorials throughout Illinois. Of the 50 operated by his agency, Blanchette said only five didn't see an increase of visitors.

Outside attractions like the Abraham Lincoln's New Salem residence saw an increase of nearly 7,000 visitors from December 2010 to this past December.

While many of these sites offer special holiday programs during the winter, Blanchette said the numbers still remain higher than normal for the season.

"This December was extremely mild. And when people don't have ice and snow to tend with, they want to get out more," Blanchette said.

These numbers come at a crucial time for historic sites in Illinois. As a whole for 2011, the number of visitors was down from 2 million in 2010 to 1.9 million.

Blanchette said his agency isn't worried about this dip, and is "optimistic that this upturn in visitors will continue through to 2012."

"When people visit communities where historic sites are, it causes a tremendous economic impact," said Blanchette. "People are buying gasoline there, they buy food there, they buy souvenirs there. They could even stay overnight in hotels all pushing money into local economies."

So far, this year's increase of winter tourism brought the state roughly $2 million for December and January through hotel taxes. The amount doesn't include any money that tourists may have spent on food, souvenirs, or gasoline. That number won't be available until June.

"It has a tremendous ripple effect in those communities. The smaller the community the bigger the ripple effect. And in some communities these historic sites are the only economic engine that they might have," Blanchette said.