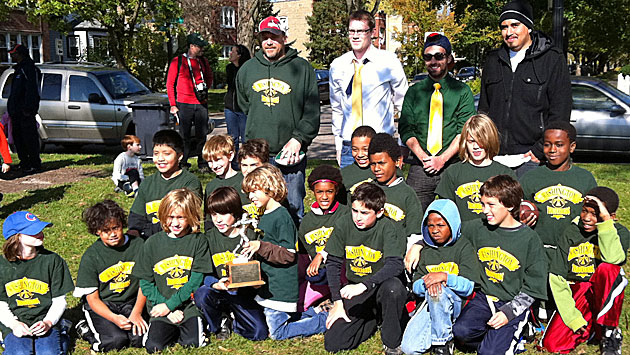 The Darrell Judon Sportsmanship Award recognizes a 4th grade and a 5th grade Evanston Recreation flag football team that best represented and followed the ideals of good sportsmanship during the season–and recognizes not just the players, but the coaches, support volunteers, and families of the players as well.

This is the second year in a row that a Washington team has been honored with the award.

The award was established in 1993 to honor Evanston native Darrell Judon, who participated in the program as a 4th and 5th grader at Dawes school.

After finishing college, Darrell returned to Evanston and worked as a flag football referee and site coordinator from 1989-1992.

After Darrell's sudden death at age 22 shortly after the end of the 1992 season, his fellow referees established this annual award to recognize the teams that best demonstrate the ideals of good sportsmanship that were important to both Darrell and the Evanston Recreation flag football league.

Top: Players and their coaches show off the award.