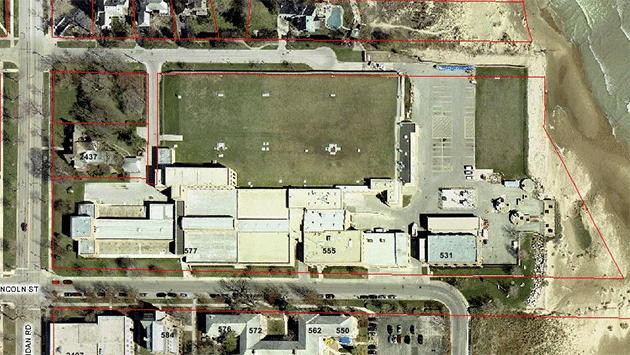 Evanston aldermen will get the bad news tonight that the roof of a nearly 80-year-old reservoir at the city’s water plant is failing and will soon need repairs estimated to cost more than $4 million.

In a memo to aldermen, Utilities Director Dave Stoneback says a consulting firm hired by the city has found that the roof of the 1934 reservoir is “in very poor condition” because of repeated freeze-thaw cycles over the years.

When the reservoir was built, modern air-entrained concrete, which is more resistant to such problems, had not yet been invented, Stoneback says.

The roof of the reservoir is used as a parking lot. Stoneback says the consultant, CTL Group of Skokie, has recommended that weight restrictions be imposed on the lot until repairs can be made, and that city staff is discussing such restrictions with officials at Northwestern University, which uses the parking lot.

The city doesn’t have funds in its current budget to make the repairs and has only penciled in enough to cover three-quarters of the work in capital improvemnt plans running through 2017.

As an interim step, city staff will ask aldermen tonight to spend $20,000 to have the consultant continue to monitor the roof’s condition through the end of this year.

Top: Evanston’s lakefront water plant, in a 2004 aerial view from the city’s website.