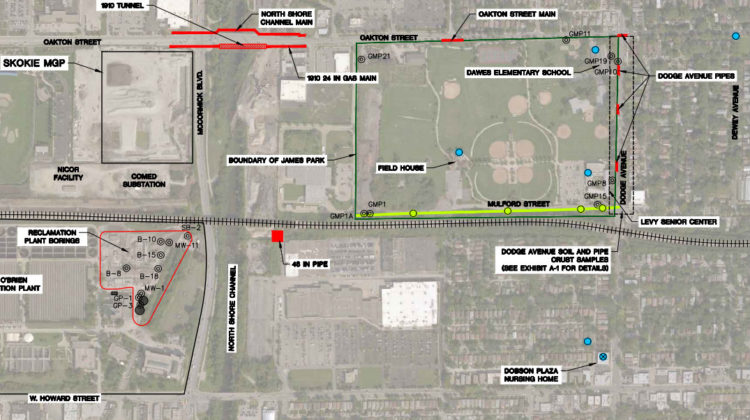 Despite discovery of chemicals associated with coal tar in drinking water at a nursing home that's led the city to file a new suit against two utilities, Evanston officials say the contamination level is so low that the water is still safe to drink.

The new complaint, filed last week, renews and expands one the city filed in 2014 against Nicor Gas and ComEd.

The original suit, which claimed methane gas found around James Park should be treated under a federal statute as solid waste, was dismissed in February after the judge rejected that argument by the city.

Both suits claim the methane was produced by leaking pipelines from the old Skokie Manufactured Gas Plant that the utilities owned and by leakage and decomposition of Lowe Process waste oil, or coal tar, used in production of the gas. 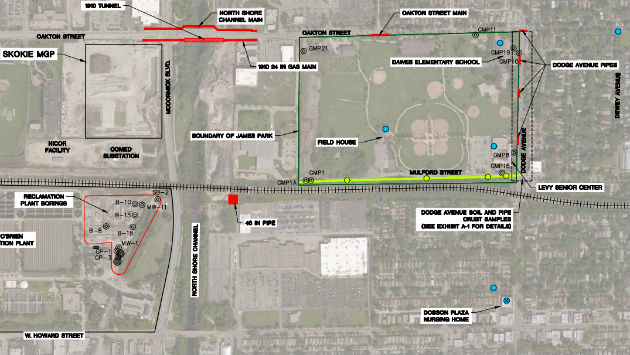 A map showing the area the city claims is affected by pollution from the former Skokie gas plant. (Click here for a larger version.)

City tests have found water and sewer pipes along Dodge Avenue coated with a black crust that the city says is consistent in its chemical make-up with compounds known to be present in the waste oil.

New in the latest suit is the claim of drinking water pollution — allegedly from the coal tar compounds seeping inside the water pipes..

The city recently conducted tests of drinking water at several locations in the area. The only test that turned up measurable levels of the two chemicals associated with coal tar — fluoranthene and phenanthrene — according to an exhibit submitted with the lawsuit, was conducted at the Dobson Plaza Nursing Home at 120 Dodge Ave.

The acting regional administrator of the U.S. Environmental Protection Agency, the city says, has said the chemical crust "does not pose an unacceptable threat to public health under the Safe Drinking Water Act."

But city offiicals say the presence of any coal tar in city water lines is unacceptable.

They also complain that the utility companies have refused to provide information about the plant's operation or to take responsibility for the methane and coal tar problems.

The city, which has posted several documents related to the case online, is seeking an order directing the companies to abate the contamination and pay compensatory and punitive damages.