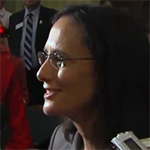 Madigan today said the decision by the high court not to take up a challenge to a New York gun case opens the door for Illinois lawmakers to adopt a "may issue" rule like New York's — which imposes sharp conditions on who may get a concealed carry permit, rather than the "shall issue" rules adopted in more permissive states.

It's now less than 60 days before, under a lower court ruling, Illinois must allow some sort of concealed carry of weapons by residents.

“The legislature now can look up and say ‘A may issue permit is now constitutional’,” Madigan said of the high court’s decision not to review New York’s concealed carry law. “It should have an impact on discussions and the debate going on under the dome.”

Madigan speaking to reporters in Springfield about concealed carry.

“I don’t think it changes anything,” said Todd Vandermyde a lobbyist for the Illinois State Rifle Association and point man for concealed carry legislation. “’May issue’ is not even part of the debate. It is either a right (to carry a gun) or it isn’t.”

Vandermyde said lawmakers are still split on how to legally allow concealed carry in Illinois. A federal court has given the state until June 9 to create a new law that allows some people to carry a gun outside their homes. Illinois is the last state with a blanket ban.

“We have more votes for a ‘shall issue’ law than they have for a ‘may issue’ (law),” Vandermyde repeated after hearing of Madigan’s comments

Concealed carry supporters, who want a “shall issue” law had 67 votes for their proposed legislation in March. It will take 70 votes to pass a concealed carry law that can overrule local gun restrictions, and that could survive a veto from Gov. Pat Quinn.

The governor on today said his position on guns is “well known,” and has not changed.

“The New York, I think, is a model for other states like ours,” Quinn said. “I think we need to have very tight restrictions on any type of concealed carry.”

Vandermyde counters that the nation’s highest court did not accept the case, but did not give a reason as to why.

“The Supreme Court could have had a number of reasons,” Vandermyde guessed as to why the justices did not want to review New York’s law.

Madigan, who’s office asked for a 7th Circuit Court review of Illinois’ weapon’s law, did not say if she would appeal to the Supreme Court.

“If she is so dead fast sure, why doesn’t she appeal this case straight up?” Vandermyde said. “We are not afraid of the Supreme Court.”

Reporter Benjamin Yount can be reached at [email protected]