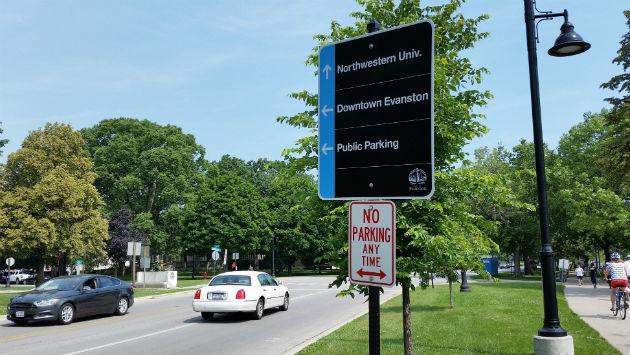 After a half dozen years of trying to develop a wayfinding signage project, Evanston officials are on the verge of again seeking outside help.

City staff told the Economic Development Committee last week that while feedback about recently installed test signs was “generally positive,” most people think the font size used is too small to be read while driving.

Alderman Melissa Wynne, 3rd Ward, said she agreed that the size of the type is too small.

But the overall size of the signs now being used is the largest that the city can produce in house on its existing equipment.

City Manager Wally Bobkiewicz said the staff has gotten good in recent years at working with online services like Google and Waze to update the data they use.

For instance, he said, when the name of the road adjoining the former Shure Bros. property on Hartrey Avenue was updated to Autobarn Place to reflect the property’s new owner, city staff was able to get that change made on the mapping services.

And, with the growing reliance on such online tools, a staff memo suggested that “motorists’ reliance on physical wayfinding signage is falling dramatically.”

But Alderman Don Wilson, 4th Ward, said that as “an analog person in a digital world,” he wasn’t convinced relying on the online services was sufficient.

Wynne said that the process of having a consultant come up with a complete new signage system — tried a few years ago — turned into “a quagmire that we shouldn’t get into again.”

But she suggested that seeking more limited consulting help on “scaling up” the current program could be a good idea.

Bobkiewicz said, “There are a limited number of firms around the country that do this kind of work,” and suggested he could have staff prepare a request for proposals and then seek City Council approval to move forward.

One idea not addressed at the meeting was making the wording of the signs more concise so that larger type could be used on a sign with the same overall dimensions.

For example, the sign pictured above provides directions to:

If instead it said:

the lettering could be made much more readable at a distance.

Got other ideas for better wayfinding signage? Feel free to suggest them in comments on this story.