All they need is a computer and access to the Internet.

It’s part of what’s called the iLabs Network, launched with a $1 million, two-year grant this spring from the National Science Foundation.

According to a Northwestern University news release, ETHS’s involvement in the online project grew out of a connection between ETHS physics teacher Mark Vondracek and Kemi Jones, the director of NU’s Office of Science, Technology, Engineering, and Math Education Partnerships. 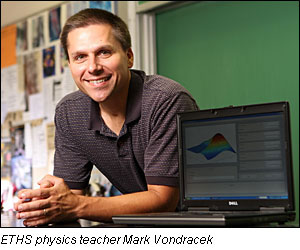 Vondracek, who was a finalist for Illinois Teacher of the Year in 2005, is a former particle physicist and teaches online courses for Northwestern’s Center for Talent Development. He says remote labs are a welcome addition for students working from their homes and for schools that don’t have equipment for labs.

“For my classes at ETHS, I am looking forward to having an expanding list of options for experiments,” Vondracek said. “There are a number of ‘classic’ experiments I do not have the resources to carry out, and some of these experiments may very well develop into an iLab at some university.”

The network has attracted participation from an increasing number of universities. “As more universities will be asked to join, high school teachers and students may in fact help design and host experiments,” Vondracek said. “I have hopes of getting my own students thinking about experiments that would be appropriate and useful for an iLab and then having them assemble it and learn how to get the electronics, interfaces, and software up and running as we host a lab.”

A big part of iLabs is teaching students about using technology on an international scale. “The whole idea of iLabs is you only need a web browser,” said Dean Grosshandler, SESP research assistant professor and associate director of OSEP.

As senior investigator of Northwestern’s iLabs, Grosshandler is charged with making sure the University’s lab projects are effective in the ETHS classroom. He also has been seeking out other partners who want to take advantage of the technology, including middle schools in Evanston and schools in Chicago.

Through iLabs, ETHS students can access a nuclear reactor at the Massachusetts Institute of Technology, as well as electronic circuits and pendulum experiments at other participating universities. “Students have the chance to work with mass spectrometers, neutron beam diffraction labs, and other resources that can really get students excited about science learning,” Jona said.

This summer, Vondracek asked 10 of his students to try out a radioactivity iLab hosted by the University of Queensland in Australia. “I asked them via email if they could try the experiment to test the technology, as well as the instructions we developed, and then check the quality of the data,” he explained. “It is completely done over the Internet as a mini pilot test of the existing experiment.”

Programs like iLabs are fundamental to helping students learn how to make use of technology that connects them to people and resources around the world. “Working together using technology is a very nice way to model for students what they need to be able to do in this day and age,” Vondracek said. “It is a new set of skills employers will be looking for as more and more companies and industries have national and international components.”