Along with music and movies, glass blowing and magic highlight a lot of activity in Evanston this weekend.

Friday is the night for music when the son of renowned blues harmonica player Carey Bell, Lurrie Bell, hits the state with Eric Noden at SPACE in Downtown Evanston. Hearing the traditional blues of the highly acclaimed artist costs $10 at 8 p.m.

If the blues doesn’t fit the mood, The Musical Offering’s, based in Evanston, own Karen Schulz-Harmon will lead the Chicago Trio Concert at the Fine Arts Building on Michigan Avenue in Chicago. Starting at 7:30 p.m. the music consists of cello, violin and piano. Tickets are $10 for adults and $5 for students.

If music does not fit the bill, learning how to make glass sculptures, tableware and light fixtures may. Chaos Glass Studio, on Payne Street, is hosting an open house that will provide an up close and personal look at the glass blowing process. According to the studio’s Web site, the open house will be open from 7 p.m. until 10 p.m.

Also this weekend, the Northwestern Theater and Performance Arts center is hosting a production of “A Connecticut Yankee in King Arthur’s Court.” The adaptation of Mark Twain’s classic is part of the Wallis Works in Progress program, which brings literary work to the stage, and will run from Nov. 7 until Nov. 15 at the Hal and Martha Hyer Wallis Theater. Shows are on Fridays at 8 p.m. Saturday at 2 p.m. and 8 p.m. and Sunday at 2 p.m. Tickets are $10.

On Saturday the Mitchell Museum on Central Street will be hosting the First Nations Film and Video Festival from 1 p.m. until 5 p.m. The festival will feature short films and two feature films. Director Sterlin Hario’s debut film “Four Sheets to the Wind” is an award winning drama about a young man’s life after the death of his father. The other feature film is “American Indian Graffiti: This Thing Life”, directed by Tyli Jacob and Steven Judd. It is the story of four young Native American adults during the summer struggling with alienation. Suggested donations ate $5 for adults and $2.50 for seniors, students and children. 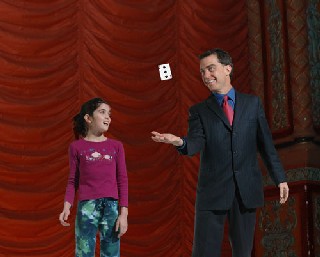 Saturday is also when the Magic happens. Magician Sean Masterson will introduce children, ages 7 to 12, to magic at the Actor’s Gymnasium with a workshop followed by a performance. Leading step by step, Masterson will spend two hours transforming the average kid into a performer. The workshop is from 2:30 p.m. until 4:30 p.m. with the performance following at 5:30 p.m. The cost is $40 to enroll in the workshop and $20 for the performance only.

On a typical relaxed Sunday, the Musical Offering School of Music, on Custer Avenue, will host a coffeehouse harp recital. The free recital starts at 4 p.m. and featured both ensemble and solo harp performances ranging from the Renaissance to contemporary.

But, Sunday does not always have to be a day for relaxation. This Sunday night SPACE will be hosting the guitar-driven rock band Neva Dinova for an 8 p.m. show. Tickets are $10 and $8 with a student ID.

Know of any other upcoming events? Post them on Evanston Now Yourself!