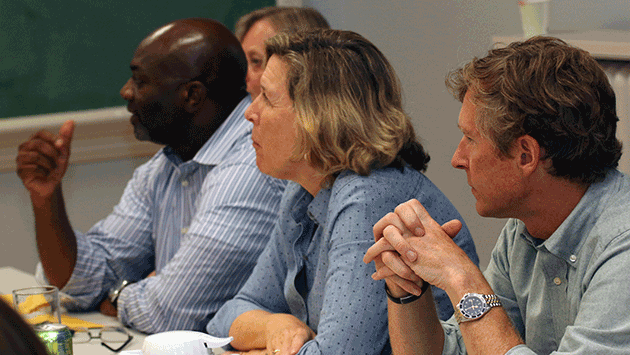 Evanston aldermen offered ideas about what they think draws people to Evanston as part of a visioning exercise at a special council meeting Tuesday night.

Alderman Melissa Wynne, 3rd Ward, said, “Many people come because it’s a progressive — I don’t want to say liberal — community. It’s not just local politics, but an overall attitude of progressiveness and tolerance.”

Alderman Don Wilson, 4th Ward, said that, in conversations with his oldest son, who’s thinking of where he wants to go to college, “it struck me that in some ways Evanston is like a big college — it has lots of different aspects and opportunities to it.”

It’s not unique, Wilson conceded, noting that he’d found a lot of similarities to Evanston in Lawrence, Kan., when he attended law school there at the University of Kansas.

Alderman Peter Braithwaite, 2nd Ward, said he meets a lot of young families in his ward who moved to Evanston from Chicago because of the school system.

“In Evanston,” Braithwaite said, “there really isn’t a bad school — the resources, the quality of teachers, the diversity of arts and sports and after school programs” are one of the special qualities of the town.

Alderman Jane Grover, 7th Ward, said that with two kids who’ve now gone through high school and lived here since they were born, “I think they’ll be back, because of the progressive sensibility here.”

“There’s a midwestern pragmatism here,” she said, “and people who’ve grown up here will be able to talk to almost anybody in the world because they’ve been grounded in their experiences here.”

Alderman Delores Holmes, 5th Ward, said Evanston “is small enough to have a homey feel, but still close enough to Chicago to have an urban sensibility. It’s difficult to replicate that anywhere.”

Alderman Mark Tendam, 6th Ward, said people in Evanston “want to be out and about, not secluded in their homes. They want to take walks in the parks, attend cultural events. There are all kinds of ways for people to get together and know each other.”

What do you think draws people to Evanston? Your comments are welcome.