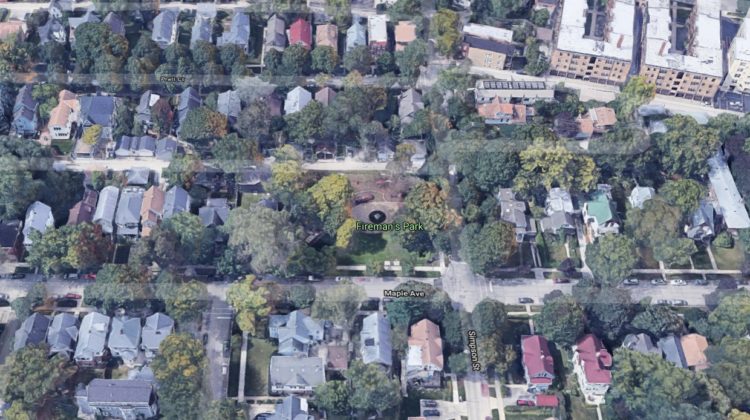 An aerial view of the area around Fireman's Park west of the Northwestern University campus that has been a focus of neighbor concerns about student housing. (Google Maps image)

If the city removed the zoning code provisions that impose tighter limits on unrelated persons than families in housing occupancy, then the number of people who could live in a dwelling unit would be regulated by the city’s housing code, which is based on the 2012 edition of the International Property Maintenance Code.

As explained by Angel Schnur, senior property management inspector for the city, that code require the following:

Living and dining space, in addition to the bedrooms:

A kitchen and a bathroom must also be provided, but Schnur says the code doesn’t specify square footage requirements for those.

Under the city’s existing rules, certain types of families — no matter how large — can live in any dwelling unit as long as the square footage requirements of the housing code are met.

But for “unrelated persons” living together — only three can occupy a dwelling unit, no matter how large that unit is.

The city code’s definition of families that don’t face the three-person limit includes:

During last week’s Plan Commission meeting, commission members began to discuss the issue. But they were hampered by the lacked a full explanation from city staff of the housing code provisions.

They heard from one landlord, David Giljohann, an adjunct professor at Northwestern University and CEO at Exicure, Inc., who rents to students in the building at 715 Foster St. where he lives.

The three-unrelated rule is often ignored and is unfairly applied based on the family definition rather than the size of properties, Giljohann said.

But a resident of the 1900 block of Orrington Avenue complained that absentee landlords who permit students to crowd into buildings create an environment that leads to the tenants holding loud parties that disturb neighbors.

Supporters of the restriction also argue that — at least in theory — it puts a cap on the rental income an owner can derive from a building and therefore discourages the conversion of single family homes into rental units.

Plan Commissioner George Halik said the issue of noise complaints keeps coming up over and over. “Clearly the way things are isn’t working,” he said. “There’s got to be a better way.”

Commissioner John Hewko said the city should move to rules based on square footage rather than familial relationships.

But he questioned whether the housing code’s square footage rules were “sufficiently robust to ensure that you’re not getting a huge number of people crammed in and creating a boarding house-type situation.”

Commissioners also raised a range of other issues — from whether the housing code limits were unfair to large families to how else the city might try to address noise complaints if the three-unrelated rule were eliminated.

Staff promised to come up with some possible alternatives for a future commission meeting.