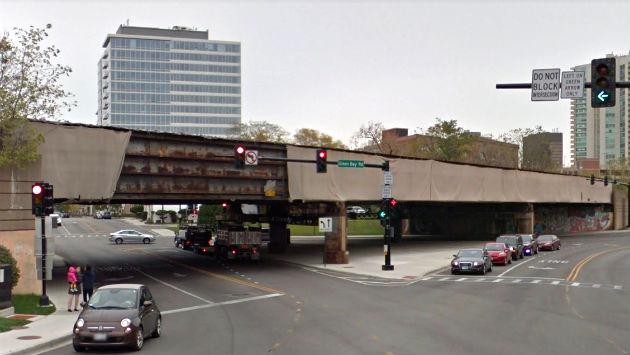 Evanston aldermen tonight will be asked what they want to do to dress up the Union Pacific viaduct at the intersection of Emerson Street, Ridge Avenue and Green Bay Road.

The unattractive state of the viaduct has been a cause for community concern for years, and the city has concluded it has no leverage to force the railroad to improve its appearance.

So whatever solution the aldermen opt for, the project cost will be borne by city taxpayers.

For the past several years the peeling paint on the metal viaduct structure has been hidden with a fabric covering installed by the city.

But that covering has repeatedly ripped, and, in a memo to alderman, Public Works Director Dave Stoneback says the railroad no longer wants to have such coverings attached to the viaduct.

That apparently rules out a solution suggested in 2015 of replacing the fraying fabric covering with a new one painted like a billboard promoting the city.

The lowest cost option, Stoneback suggests, would be just to remove the covering and the clamps that fasten it to the metal surface and let the rusted metal show.

A second option, he says, and one that is included in the city’s capital improvement plan budget for this year, would be to clean and paint the most visible parts of the structure, at an estimated cost of $350,000.

A third option, Stoneback says, would be to consider whether a free-standing decorative banner could be placed in front of the viaduct — somewhat similar to what was done some years ago at the Union Pacific viaduct on Howard Street.

However, Stoneback says the much larger size of the Emerson viaduct and limited clearance on the center island may make that solution infeasible.

Stoneback suggested that if the bridge is to be painted, the color chosen should be reddish brown, a color recommended by the Illinois Department of Transportation.

However other viaducts in Evanston are painted a range of colors and a 2010 IDOT memo on bridge painting policy lists three other color options — Interstate Green, and particular shades of blue and grey. (In 2017 IDOT also asked Joliet officials to choose the color they’d prefer for IDOT-maintained bridges there.)

A 2014 design concept for the viaduct suggested a blue paint scheme.

Over the past few years the Emerson-Ridge-Green Bay intersection has seen an $11 million upgrade to its traffic patterns and installation of a sculpture underneath the viaduct.

Last year aldermen opted to postpone plans to paint the viaduct while they worked to eliminate a projected budget deficit.