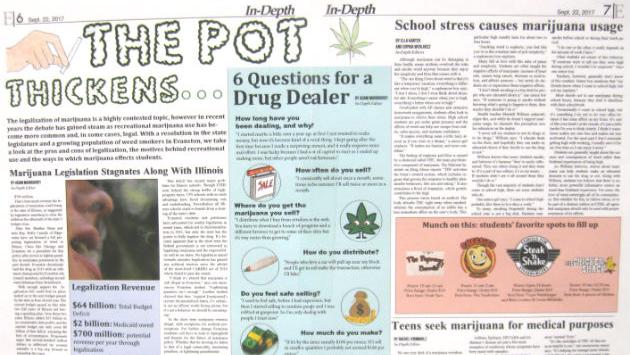 A two-page spread in Evanston Township High School’s student newspaper about marijuana usage led to a confiscation of the paper by school officials. We’ve examined the content of the offending articles and can now report on what they say.

The drug stories took up most of pages 6 and 7 of The Evanstonian’s  Sept. 22 issue and were presented under an overall heading titled “The pot thickens…”

Noting that the legalization of marijuana is a controversial issue, the series of articles is preceded by a statement that “with a resolution in the state legislature and a growing population of weed smokers in Evanston, we take a look at the pros and cons of legalization, the motives behind recreational use, and the ways in which marijuana affects students.”

The lead article, by Adam Marquardt, examines a bill in the Illinois legislature that predicts increased revenue for the state of $700 million from marijuana legalization that would help the state trim a $64 billion budget deficit “that has caused major problems for Illinois schools.”

The article noted that Evanston “decriminalized” marijuana in an ordinance in 2011, “but only the state has the power to fully legalize the drug.”

A second article, by Ella Kanter and Sophia Weglarzz, is based upon interviews with ETHS students who have tried marijuana and continue to use the drug, even though “marijuana can be damaging to their health.”

The article, headlined “School stress causes marijuana usage,” quotes students who have “smoked weed” in an effort to determine why they do it.

It reasons that “overloaded with AP classes and extensive homework assignments, students often look to marijuana to relieve stress.”

It quotes a sophomore boy as saying “Smoking weed is euphoric. You feel like you’re in this constant state of just simplicity.”

The vast majority of students don’t come to school high, the article states, but there are some students who do.

A senior girl was quoted as saying “I come to school high probably like three to five days a week.”

The article says that “students are generally taught about the science and consequences of weed rather than the firsthand experiences of being high.”

The article concludes that “whether for fun, to relieve stress, or to be part of a distinct culture at ETHS, all agree that marijuana should only be used with proper awareness of its effects.”

In an article headlined “6 Questions for a drug dealer,” by Adam Marquardt, the following six questions were presumably asked of a drug dealer:

How long have you been dealing and why?

How often do you sell?

Where do you get the marijuana you sell?

How do you distribute?

Do you feel safe selling?

How much do you make?

It quotes a number of studies that explain how marijuana is used to reduce pain and anxiety and notes that an Illinois resident must be 18 years of age to obtain a medical marijuana card.

The article concludes with an internet link to a website that gives “more information on the benefits of marijuana.”

The administration, in its statement last week, said that the school was justified in confiscating the copies on the grounds that “when student journalism incites unlawful acts, violation of school policy, or disrupts the school, the administration has the authority to impose limits. The articles on September 22, 2017 did cross these lines and were removed from circulation for that reason.”

The student journalists who spoke during the Public Comment portion of last week’s District 202 Board meeting, contended that the purpose of the articles was not to condone marijuana use but was intended to inform student readers about why some students use marijuana and how prevalent it is at ETHS.

They disagreed with the administration’s assessment that the articles cross the line legally into territory that permits the confiscation of the newspapers.