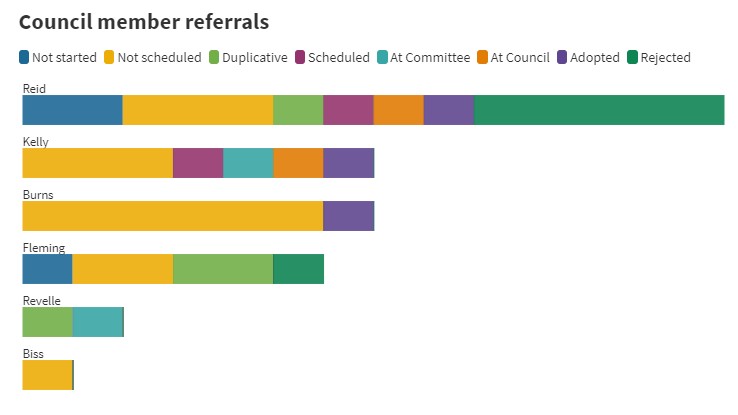 The newly-elected Evanston City Council created a new committee this spring to play traffic cop on assigning suggestions from alderpersons for new legislation to committees for review.

Three months into the new Council’s term, here’s a look at how council members are doing in getting their bright ideas through the legislative process.

As might be expected, the newly elected council members have generally been far more active in making referrals than alderpersons who’ve been on the Council for a while.

Three returning members — Peter Braithwaite (2nd), Melissa Wynne (3rd) and Tom Suffredin (6th) — have made no referrals since the new Council was seated in May. They’re joined in the no-referrals group by new Ald. Jonathan Nieuwsma (4th).

Ald. Devon Reid (8th) leads the pack in number of referrals made with 14, and since he got an early start in making referrals, more of his proposals have worked their way through the process.

So far he’s failed to convince a Council majority that five of his ideas actually were bright — those have been rejected by the Council. One Reid proposal has been adopted with amendments and one more is scheduled for a final vote Monday night.

Ald. Clare Kelly (1st) and Ald. Bobby Burns (5th) are tied with seven referrals each. They’ve each gotten one proposal adopted so far.

The Referrals Committee has decided that four ideas suggested by various council members duplicated proposals already working their way through the staff and committee review process. Reid had one of those, Ald. Cicely Fleming (9th) had two and Ald. Eleanor Revelle (7th) had one.

Fleming has also had one proposal rejected by the Council.

Mayor Daniel Biss has only made one referral so far, and though he chairs the Referrals Committee, the committee hasn’t yet scheduled a date for action on that, although it has decided to refer it to the Economic Development Committee.

At its meeting Thursday morning, the Referrals Committee, whose member, in addition to Biss, are Fleming and Revelle, assigned scores to some pending referral items. You can see the scores if you mouse over items in the treemap chart above.

The committee used a 1 to 3 scale for each of the criteria, with a lower number indicating high time sensitivity, lower “scope” or demand on staff resources, closer connection to existing city policies, a lower level of community interest and a closer alignment with city goals and priorities.

The committee is next scheduled to meet at 9 a.m. on Thursday, Aug. 5.