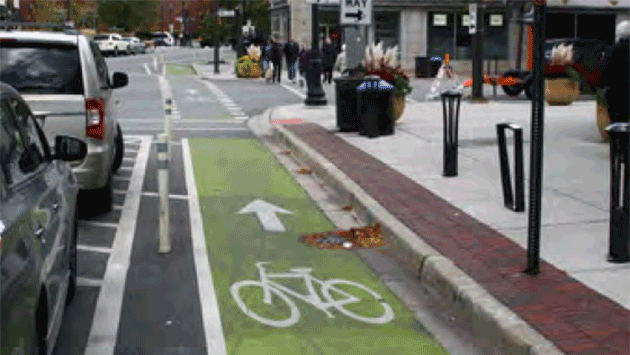 Plans to add three blocks of protected bike lanes to Chicago Avenue from Sheridan Road to Davis Street were put on hold this week after one alderman sharply objected to the idea and another pushed for more public discussion of the city's overall bike strategy.

She said the plan to reduce on-street parking to make room for the bike lane would conflict with the city's economic development goal to bring more people downtown and claimed it would be dangerous to add bikers to the street.

But Alderman Jane Grover, 7th Ward, said bikes are already on the street and providing a safer solution for them would help.

"Being a bike-friendly city is good for business, too," Grover added.

City staff told aldermen there's sufficient unused parking in the Church Street garage to replace the lost on-street parking and proposed reserving the first level of the garage for two-hour parking for shoppers.

Burrus suggested putting the bike lane on the largely-residential, and narrower, Hinman Avenue one block to the east — which would leave unresolved how cyclists would get to the businesses along Chicago Avenue to shop there.

Alderman Ann Rainey, 8th Ward, said that at a recent meeting in her ward there was "extreme concern" about the way bike lanes have been done all over the city. She called for more public meetings on the issue.

Public Works Director Suzette Robinson said the city, which has received a $1.4 million grant for the Chicago Avenue bike lane project, is under time constraints to get the project designed this year and under construction by next spring.

"If we can't do it next year, it will have to wait until 2017, because we have projects on Emerson, Ridge and Green Bay coming up in 2016," Robinson said, and there's a limit to how many downtown streets can be torn up in a single construction season and still keep traffic flowing.

Seeing that at least two of the six members of the committee appeared to be uncomfortable with the project, City Manager Wally Bobkiewicz stepped in saying he was concerned "that staff and council are not in sync."

After some discussion the committee decided to place the overall bike plan and the Chicago Avenue project on the agenda for a full City Council meeting to be held on either the third or fifth Monday in September.