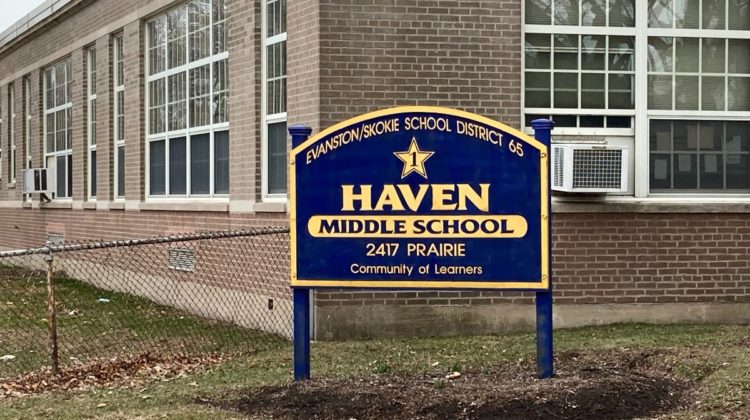 13-year old Winnie Choi observed the first anniversary of remote learning at her house by going back to school, sitting at a desk all day, and working on the computer without a teacher in the room … just like at home.

“It was really weird,” Winnie, a 7th grader at Haven Middle School in Evanston/Skokie District 65, told Evanston Now, about her first day back on March 11, following a year of pandemic-caused e-learning.

While many District 65 students returned to classrooms with teachers on Feb. 18, Winnie was among those called back to school a few weeks later, only to find herself in the room with several other youngsters, desks six feet apart, each using their laptops to watch a teacher who was either at home, or perhaps just a few doors away in another part of the building.

“We sat in silence all day,” Winnie said. Even at lunch, when “nobody said a word,” as the students all ate at their desks. The non-teacher rooms do have adult supervision, but the only time students get out is for gym class.

Winnie’s mom, Nan Choi, was not impressed. Even though her daughter did return to Haven, Choi said the call-back was a “last-ditch effort” by the district. There were vacant rooms in schools, she said, and the system was just “appeasing people to come in and do exactly what they’re doing at home.”

When District 65 began its hybrid plan, there were capacity limits due to social distancing guidelines. Families were given the choice: in-person or remote, but with fewer desks in classrooms, not everyone who wanted in-person was able to get it. It has been a political and logistical challenge for decision makers.

The first priority for in-person school was given to students with designated “flags,” for categories such as special education, low income, or English language learner.

Choi said the family gave their “in-person” school preference last summer. But for much of the current school year, all students were on remote learning due to COVID-19, so the preference was moot. But when hybrid started in February, Winnie was still left at home on her computer while others went back. She did not have any priority flags.

In the second week of March, however, Choi said she received a call from the District, asking if Winnie could return to Haven in three days. “I asked if it was a crank call,” Choi said. “We had totally given up hope.”

Choi said Winnie was impacted far more socially and emotionally than she was academically from the year of school at home. She was “really bored” and cried easily. Many other neighborhood kids found it “hard to get excited about anything.”

The children, Choi said, “were starved for socialization.”

Making it even tougher for Winnie was the fact that her younger brother, a 5th grader, did go back on the first day of hybrid in February. District 65 said there were no capacity problems in the elementary schools. The issue was with the three middle schools.

District spokesperson Melissa Messinger told Evanston Now that “with the exception of Haven … District 65 schools have been able to accommodate family requests for in-person learning.” The district never has revealed how many families originally wanted in-person versus staying remote, but on March 22, Superintendent Devon Horton told the Board of Education that 3,600 students, about half of the K-8 total, are now in school buildings.

Families had until March 24 to request a change … remote to in-person, or the other way. “As seats for in-person learning became available, they were filled in the order in which the forms were submitted,” Messinger explained.

But as for students like Winnie, who are doing remote school inside their school building, it’s still uncertain if they will get a real live class with a real live teacher by the end of the semester. Messinger said as more teachers become vaccinated and return to work, “as much as possible, students will be placed into classrooms for live instruction with a D65 educator.”

But that will not be possible if the teacher still works from home. In that case, Messinger said, students who do come back will still have supervised e-learning in the classroom, along with a “focus on community building and support.”

While Winnie is not thrilled with watching her teacher on screen when the teacher is just a few doors away, she said being back in school has some advantages. “I did more work there than I did in my house,” she said. There was “increased productivity due to fewer distractions.”

Winnie also told us that in-school gym class is a lot better than PE on Zoom, where “you were just told to work out and nobody did anything.” At least now, there is activity, running around the track, or playing ball … by yourself, with your own ball, which has to be wiped down after gym is finished.

Winnie’s mom is frustrated that her daughter, who is in advanced math, is on a computer while some of her classmates are right down the hall with a teacher. Choi said the district should have done more to start school sooner, with additional in-person teaching as virus metrics improved.

As for Winnie, at least being in the Haven building is, as only a 7th grader can put it, “better than nothing.”

“I get to wake up in the morning, get ready for school, and walk there with my friends.”

And at least the teacher-less classroom is peaceful. On her first day back, Winnie said “everybody was completely quiet” during lunch. “I brought a bunch of crunchy food,” she said. “Everyone could hear me eat.”

The next day, Winnie said she “brought soft food.”