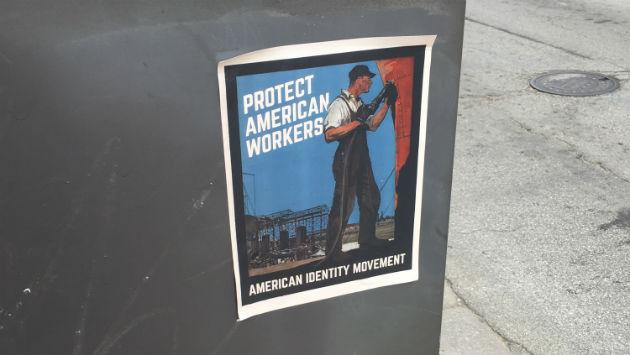 An Evanston Now reader says he spotted a poster from a white nationalist group on a traffic signal control box at the corner of Main Street and Chicago Avenue in Evanston this morning.

The poster is identified as a product of the American Identity Movement. The Southern Poverty Law Center says that’s a rebranding of a group formerly known as Identity Evropa, which was involved in organizing the deadly 2017 “Unite the Right” rally in Charlottesville, Virginia.

Posters from the group have shown up elsewhere in recent days, including in Virginia Beach, Virginia, and the group is said to be planning a rally this weekend in Dallas, Texas.

Placing any posters on city property in Evanston violates the city code. They can be reported as graffiti to the city’s 311 Center to have them removed.