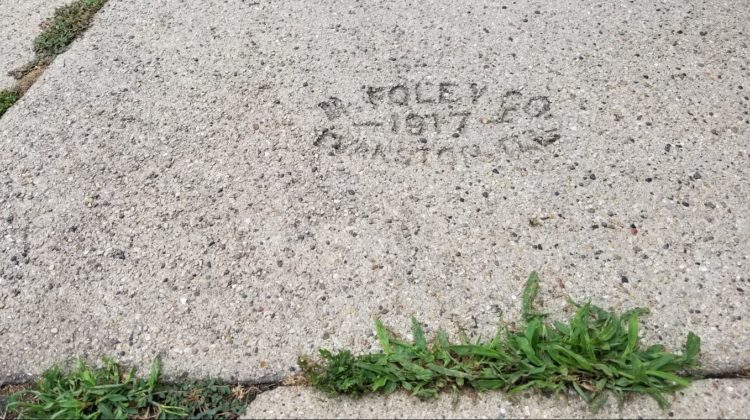 A marker indicating a stretch of sidewalk on Greenwood Street at Florence Avenue is more than a century old.

Ald. Jonathan Nieuwsma (4th) says homeowners shouldn’t have to pay to replace sidewalks in front of their homes.

Instead, he told members of the Administration and Public Works Committee last week, the city should fund replacements the same way it funds street repairs — taxing everybody in town for the costs.

The city currently asks homeowners to pay half the cost of most sidewalk replacements. That discourages people from requesting the repairs. And, city staff says, it has led to declining sidewalk quality around town and an estimated $16 million tab for the deferred maintenance.

While staff says the typical life span of a sidewalk is about 60 years, it’s not hard to find contractor’s marks on walks around town that indicate some stretches of sidewalk are more than a century old.

The issue — raised as a discussion item at the end of a lengthy committee meeting — didn’t get much comment from other aldermen, except for a suggestion from Ald. Peter Braithwaite (2nd) that the city target sidewalks designated as safe routes to school for priority attention.

City Engineer Lara Biggs said she had the feedback she needed and would return to Council with a more specific recommendation in the future.

Meanwhile, Nieuwsma is holding a ward meeting at 7 p.m. tonight at the Robert Crown Center to discuss how the city should spend $43 million in pandemic relief funds it is receiving from the federal government.

He may get some feedback from constituents about where they believe sidewalks might rank on a spending priority list.