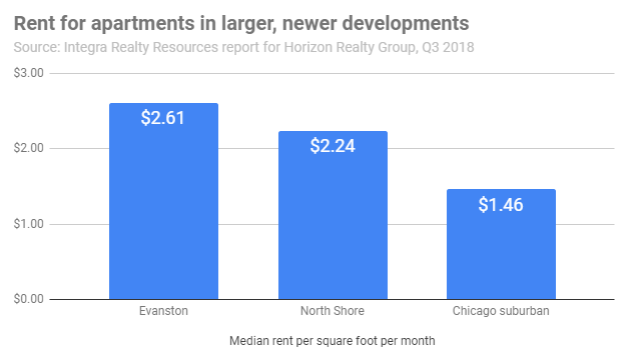 If you want to rent an apartment in one of the fanciest buildings in town, it will cost you more in Evanston than in other Chicago suburbs.

A report from Integra Realty Resources prepared for Horizon Realty Group and submitted to the City of Evanston as part of Horizon’s new planned development application for The Legacy, a proposed active senior apartment development at 1621 Chicago Ave. says the median rent per square foot for new high-end developments here is $2.61.

That’s nearly 17 percent more than the North Shore average, and nearly 79 percent higher than the overall average for suburban apartments in the Chicago region.

(For Integra’s purposes, the “North Shore” includes all of Cook County north of the Chicago city limits and east of I-294.)

Integra says it keeps track of nearly 100,000 apartment units across the Chicago suburbs. That’s the newer, larger developments that would attract interest from professional investors and that new, large-scale developments would potentially compete with.

So we’re not talking here about vintage three-flats or courtyard apartment buildings that make up much of the rental housing stock in Evanston.

What accounts for the price differences? The biggest factor, Integra says, is that in Evanston the new construction consists mostly of mid- and high-rise buildings that have a typical construction cost of around $300 per square foot.

That compares, Integra says, to a cost of around $130 per square foot for the walk-up apartment complexes typical in more distant suburban locations where land costs are also cheaper.