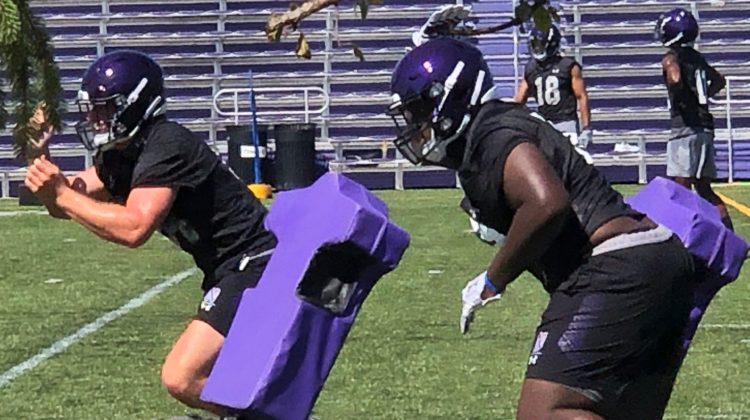 With the Big Ten football season still a question mark, the Northwestern Wildcats had their first fall practice this morning, after a COVID-19 scare turned out to be a false alarm.

On Monday, NU announced that pre-season workouts were being paused because one player had a positive coronavirus test. The Associated Press said 37 others were quarantined following contact tracing. The Wildcats had been doing a series of pre-season activities for the team, ranging from voluntary workouts in June, though walk-throughs and team meetings in late July.

But today, NU said the COVID test turned out to be a false positive, and fall practice was allowed to begin. Evanston Now saw Wildcats hitting the tackling sled.

Coach Pat Fitzgerald was quoted by the AP as saying “I think it showed that our plan and our execution of our plan has been flawless.”

Northwestern is scheduled to begin its’ season on Sept. 5. However, Big Ten Commissioner Kevin Warren has said the season could be called off if the coronavirus pandemic makes it unsafe to play.