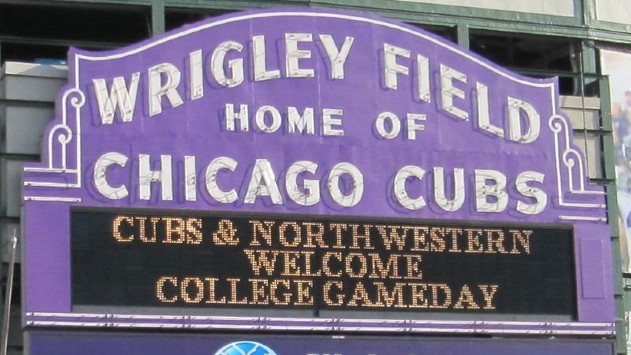 The college football season has not even started, but the final score of a planned game at Wrigley Field is Coronavirus 7, Northwestern 0.

The Wildcats game at the home of the Chicago Cubs, scheduled for Nov. 7 against Wisconsin, has been postponed due to COVID-19.

In a news release today, the university said the decision was made after consulting with the Cubs, state and local authorities, the Big Ten conference, “and in consideration of the myriad challenges presented by the coronavirus pandemic.”

Jim Phillips, NU’s vice-president for athletics and recreation, said, “This is a disappointing conclusion to reach, but absolutely the right one in our current environment.”

He said the uncertainty of football and baseball schedules and the possibility of limited attendance “made this an easy choice to make for our student-athletes and fans.”

Crane Kenney, Cubs president of business operations, said “postponement of the next installment of Northwestern football at Wrigley Field made sense given the great number of challenges and uncertainty to navigate in a pandemic environment.”

The Wisconsin game will be shifted to Northwestern’s home at Ryan Field in Evanston, if the game is played at all.

The college football season is still one giant question mark. Ray O’Connell, public relations spokesperson for NU athletics, says, “The schedule is so tentative and uncertain right now that we just went with what we know. If there is a game versus Wisconsin and If it is on Nov. 7, it will be at Ryan Field.”

But it’s still uncertain whether there will be games at all, or if there are games, whether fans will be in the stands.  Phase 4 of Gov. J.B. Pritzker’s “Restore Illinois” plan limits outdoor sports facilities to 20 percent of capacity.  For Ryan Field, that would mean only about 9,400 of the stadium’s 47, 130 seats could be occupied.

There’s also a chance football would go on without any spectators. Universities get millions of dollars from televised games, so there is financial pressure to play.

As for Wrigley Field, both Northwestern and the Cubs said they look forward to a game there in the future.  The Wildcats brought college football back to the Friendly Confines in 2010, for the first time since 1938. It had been scheduled to play one game each season at Wrigley in this year and in 2022 and 2024.

Northwestern is scheduled to open its 2020 season on Sept. 5, against Michigan State on the road. The first home game is slated for Sept. 12, against Tulane.

But like a high, booming punt, the college football season remains up in the air. Spokesperson O’Connell said state, local, university and Big Ten officials are considering a variety of scenarios, but “there has not been a decision made about anything regarding games this fall.”