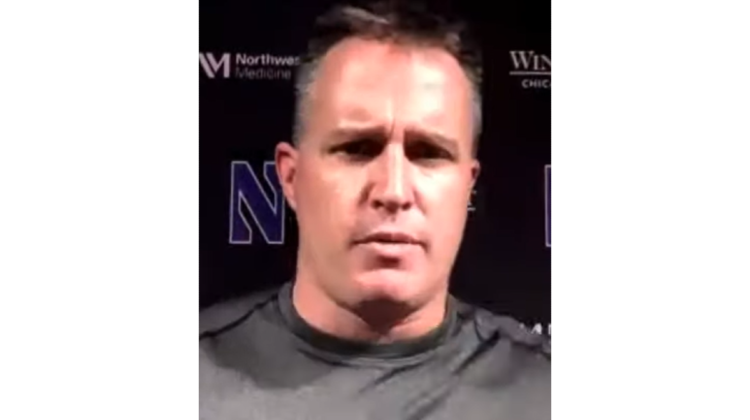 Minnesota 47, Northwestern 0. No, that’s not the score of a Big Ten football game. Rather, it’s the number of confirmed COVID-19 cases among players and staff on each squad.

And because of that, the Northwestern-Minnesota game scheduled for this Saturday has been cancelled, joining the list of more than 100 college football cancellations or postponements due to the coronavirus this fall.

Most Big Ten teams have had some COVID cases, either in preseason practice or since the schedule has gotten underway. But Northwestern has not had any.

Head Coach Pat Fitzgerald realizes that could change in a second, but told reporters this week that “our guys have been incredibly disciplined” with their social interactions. “I’m really proud of the guys,” he added.

Fitzgerald said Northwestern has a “unique campus environment that probably some of our peers do not have.” NU banned first and second year students from on-campus housing this quarter, as a way of minimizing close living and dining situations typical of dormitory life.

The coach expressed his “thoughts and prayers” for members of the Minnesota program who tested positive for the virus. “We know they’re going through a challenging time, and we hope all their guys … recover fully and get back to health. That’s the number one priority.”

While Northwestern has the Big Ten West division title all but wrapped up, with a 5-1 record so far, COVID-19 might impact who they would play in the Big Ten championship game.

Because the Big Ten is playing an abbreviated season which started late, there are no available dates to make up COVID-cancelled games. And in order to qualify for the championship contest, a team must play at least six games on their eight-game schedule.

Ohio State, the East Division leader at 4-0 has already had two games called off due to the virus. If this Saturday’s OSU-Michigan State game is also cancelled due to OSU COVID, the Buckeyes will only have a maximum of five games. That would disqualify them for the Big Ten championship game, even if they remain undefeated. Northwestern would play somebody else.

So there are clearly a lot of “what ifs” remaining in this most unusual of all football seasons. But, said Fitzgerald, “we just have to control things we can control.”

And there is one other thing which is very obvious, the coach said: “This pandemic is real.”