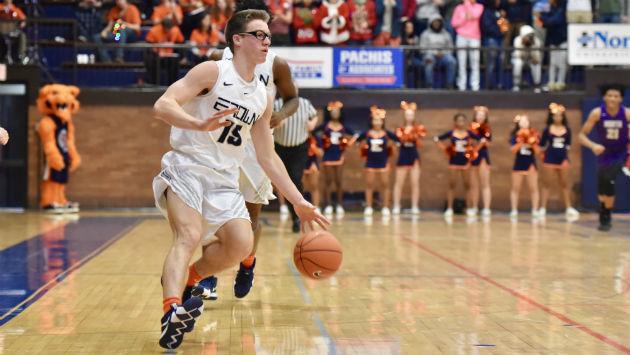 And after the applause died down, the Wildkits went about the task of adding to their total of 1,532 victories since the program started in the early 1900s.

Evanston destroyed Niles North 67-41 in a Central Suburban League South division game behind Blake Peters’ 19 points and Ryan Bost’s 17 in a dominant all-around performance at both ends of the court.

The Wildkits, now 7-1 overall and 2-1 in league play, are scheduled to play two more non-conference games — at home Saturday versus Saint Joseph and on the road Tuesday at Zion-Benton — before taking on the challenge of back-to-back Christmas tournaments in Kentucky and downstate Centralia, so every win counts in the mind of head coach Mike Ellis.

“That’s our agenda, to win as many as we can,” Ellis said. “We’ve been battling some health issues this week and guys have been missing practices on a daily basis, but we still did a good job tonight and I thought this was one of our better games when it came to just playing possession by possession.

“The catchword for this game was consistency. We tried to focus on not trying to make the great plays, just the consistent plays.”

That sounds simpler than it is matched up against a Vikings’ team that was decimated by graduation after last year’s outstanding season, but still embraces a playground style where the focus is on the flashy. North, now 4-3 overall, didn’t have many of those moments Friday night as Wildkit defenders Bost and Itchy Holden won their individual 1-on-1 battles against the players they were guarding, Aquan Smart and Elijah Bull.

Bost outscored Smart, the Vikings’ top scorer, by a 17-12 margin and limited him to just 5 points in the first half, when the hosts broke out to a 33-20 lead. And although Bull, who started his cage career in Evanston before transferring, hasn’t been much of a scorer for the Vikings to date, Holden outscored him 9-8 and set the defensive tone by forcing the visiting point guard into 4 early turnovers.

Jalen Christian (21) of Evanston gets off a shot over Niles North defender Jalen Butler.

It was only the second start of the season for Holden, a sophomore, who earned his way into the lineup with a solid week of practice.

“I thought Ryan Bost was really solid for us tonight,” praised Ellis. “He made plays on both ends of the floor, and he stabilized us whenever we didn’t have a good possession. Smart is a dangerous player for them and Ryan did a good job of neutralizing him. That’s a hard team to guard, because they can get to the basket or shoot 3-pointers, and you have to stay in front of them and not over-help (on defense).

“Itchy and Elijah were teammates growing up in FAAM (Fellowship of African American Men) and they’re very familiar with each other, as opponents and as teammates. Itchy had a great week of practice and it was good to see  him put his best foot forward tonight.”

Ryan Bost (24) of ETHS looks for a hole in the Niles North defense.

Peters didn’t miss a shot in the first half — either from the field or at the free throw line — and he accounted for a rare 4-point play when he buried a 3-point shot and added a free throw midway through the first quarter. For the game, he shot 4-of-6 from 3-point range and only attempted one field goal in the second half, finishing at 5-of-7 overall.