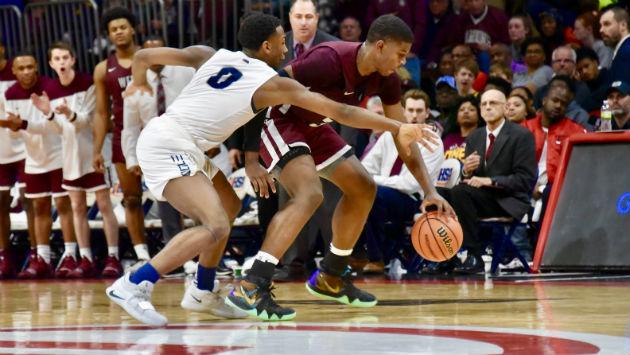 But there was no denying Class 4A defending state champion Belleville West.

The Maroons scored a 71-59 victory over the Wildkits here Saturday night in the championship game of the Illinois High School Association tournament at Carver Arena and became the first big-school champion to repeat since Chicago Simeon in 2012-13.

A second-half comeback by the determined Maroons — who trailed by double figures in the first half — spoiled Evanston’s title bid. And the tears flowed freely in the aftermath for the Wildkits, who were hoping to improve on last year’s 3rd place finish by bringing home a title to match the legendary 1968 ETHS team.

Instead, Coach Mike Ellis’ squad fell 1 win short of their season-long goal despite tying the school single season record for victories (set by the 1984 State runners-up) and finishing a memorable campaign with a final record of 32-5.

Seniors Jaheim Holden (20 points) and Lance Jones (15) did their best to end their careers on a high note, and sophomore Louis Lesmond added 12 off the bench. But the Kits only sank 4-of-24 field goal attempts from 3-point range and were out-rebounded 42-25 by the veteran Maroons.

Those numbers didn’t add up to a happy ending for the Wildkit faithful.

“Obviously, coming off that semifinal game (a 94-82 drilling of Rockford East), you won’t get loose to shoot like we did last night,” Ellis said. “You know they’re going to cover up our shooters and have hands in our face. And it’s not easy to defend dunks and layups like they got against us in the second half. And it wasn’t just their size that beat us. They had a lot of unchecked guys on the back side of our defense. They did a nice job running their offense through Liddell on the interior.

“We missed lay-ups and we missed 3s tonight. It’s very simple, like a middle school basketball game. One team made their lay-ups and one team missed theirs.”

Evanston built a 12-point lead midway through the second quarter and still led 35-25 when Holden connected on a 13-foot jump shot. But the Maroons scored the last two buckets of the half — by Marcellus Romious and Tommie Williams, off a feed from Liddell — and Wildkit fans could sense the lead slipping away.

“I thought our guys did a nice job of coming out strong ready to play tonight,” he said regarding Evanston’s good start, “but toward the end of the half Belleville cut it to 6 and I thought that brought them some momentum. And that momentum carried over to the second half.”

The Wildkits mustered only 24 points in the second half and trailed 47-46 entering the final quarter. They missed 6 of 7 3-point attempts in the last 8 minutes, fell behind 61-55 with 1 minute 56 seconds remaining, and shifted into a gambling mode on defense that allowed the Maroons to rack up 10 more points on lay-ups and dunks.

“They outplayed us in the second half,” admitted Holden, a 3-year varsity starter along with Jones and classmate Ryan Bost. “Everything was going our way in that first half — we were getting to the free throw line, we were making shots — but in the second half the ball went in and out a lot. We missed some easy lay-ups that we should have finished.”

For the game, ETHS shot just 37 percent (22-of-59) from the field. That showing was in marked contrast to the performance they turned in just 24 hours earlier in one of the highest scoring games in state finals history.

The Wildkits as a team tied a Class 4A finals record with 12 3-point baskets (in 19 attempts) and sophomore Blake Peters tied an individual 4A mark with 7 triples of his own in an offensive shootout that found the winners scoring more points than any other Evanston team in 31 previous games at State.

Blake Peters of Evanston lines up another 3-point basket in the semifinal win over Rockford East.

The 94-82 triumph over defenseless Rockford East allowed the Kits to tie the school single season record for wins and marked the 200th triumph for Ellis in his 9 seasons as head coach at ETHS.

Peters scored a game-high 27 points and four teammates — Jones with 24, Holden with 15, Bost with 10 and Jaylin Gibson with 10 — also scored in double figures as the winners shot a blistering 63 percent (29-of-46) from the field.

Ryan Bost, a senior from Evanston, sizes up Belleville West’s Lawrence Brazil for a possible steal.

Bost scored a rare 4-point play to push the Evanston lead to 59-40 midway through the third quarter. The E-Rabs did chop the deficit to 10 points, but Evanston responded with a 26-point splurge in the final period to advance to the title game.

“Tonight we came out and played like we were on a mission,” said Ellis. “We played with a lot of poise. This is a diversely talented group of players and they have no problem sharing the basketball.”

Peters poured in 19 points in the first half following quiet performances in both the sectional championship and super-sectional victories.

It’s likely that Rockford East’s scouting report barely mentioned the sharp-shooting sophomore prior to the game.

“We all like being on the big stage,” Peters said. “My teammates gave me the ball in my (right) spots tonight. It just came down to performing. All year we’ve talked about how the best shot (on a given possession) can come from any one of us. We’re really hard to stop, especially when we play together like we did tonight.”

The ETHS bench pays tribute to another 3-point basket by sophomore Blake Peters by focusing on his goggles.

Jones, who will play his collegiate basketball at Southern Illinois University, and Holden both surpassed the career 1,000 point plateau at ETHS. Jones was named first team All-State by the Illinois Basketball Coaches Association and was a second-team choice on the Associated Press All-State squad.

Ellis, who was hoping to bring home the big trophy after twice leading Peoria Richwoods to State runner-up finishes in 2006 and 2010, said working 4 years with the senior trio of Jones, Holden and Bost provided plenty of memories for him.

“I’m not one to measure our performance in how our shots fall,” he said at the press conference following the championship contest. “These guys play the right way. These guys up here on the stage, I can’t say enough about them, especially these 3 seniors. They will go down as the winningest players in ETHS history (all 3 were on the varsity for 4 years) and they’ve given so much to the culture and the tone of this program.

“What I’m most proud of is the way these guys came  in here as individuals trying to make a name for themselves, and now they’re making their name as a team.”

Holden acknowledged that at some point in their careers there were outsiders suggesting it should be “Jaheim’s team” or “Lance’s team” as the coaching staff sought to fill a leadership void when Nojel Eastern left for Purdue University.

Instead of one individual emerging — as might happen at other schools or in an AAU-type culture — the trio turned in a collective and collaborative effort on and off the court when it came to leadership and all 3 blossomed as players, too.

“Lance and I never talked about it, but we heard that talk from people outside our lockerroom,” said Holden. “People tried to make us compete against each other, but we both wanted the best for each other and I couldn’t have played with a better two-guard.

“The brotherhood we’ve created here over the last couple of years has made memories for us for the rest of our lives.  I love each and every one of them. I think we’ve done a lot for Evanston (108 victories in 4 years, back-to-back Final 4 trips) and it’s really been a blessing to have the opportunity to create a culture for more winning.”