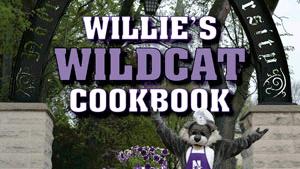 The cookbook is the brainchild of the CatBackers, a women’s support group for athletics at Northwestern University.

“We realized that NU was one of two Big 10 schools without a collection of recipes for tailgates, dinner parties and beverages,” said Joann Skiba, who first brought up the idea a year ago.   “And who doesn’t like to share their favorite recipes?”

Close to 600 recipes later, the book will be available Sept. 15. Liz Kerr, CatBackers president, says “Testing the recipes was fun, we had so many varieties of foods….appetizers, main dishes, desserts galore, we certainly enjoyed that portion of the book!”

Loaded with coaches’ quotes, photos and recipes, the cookbook will sell for $25 each plus shipping and handling. All proceeds from the cookbook will go the Wildcat Fund which supports all 19 varsity sports at Northwestern.

The cookbook will be available from NUSports.com and from Let’s Tailgate in Evanston, The Bookstall at Chestnut Court in Winnetka, The Backyard Barbecue in Wilmette, the Northwestern University Bookstore in the Norris Center and Beck’s Bookstore in  Evanston.

Books will also be sold at NU football games through the Let’s Tailgate kiosks around Ryan Field and at CatBacker luncheons this fall.