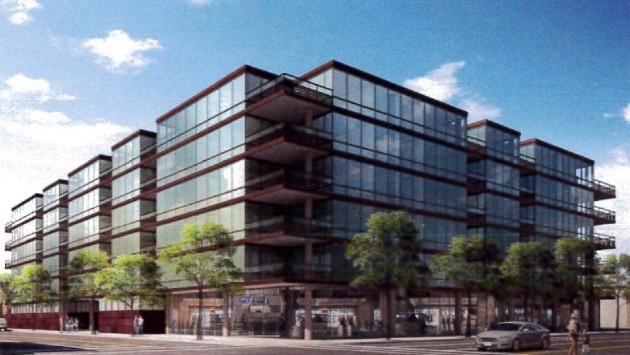 The Plan Commission in Wilmette is scheduled Tuesday to review a proposal for a new planned development that offers an approach to providing affordable housing that may be of interest to housing advocates in Evanston.

The project, from Glencoe-based Optima, Inc., calls for a mostly six-story mixed use building with a partial seventh-floor amenity area on a site at 1210 Central Ave. that currently houses the two-story International Bank of Chicago building and where the base zoning calls for no more than four-story height.

Unlike Evanston, Wilmette does not require new projects to include affordable housing units, but it treats such units as a public benefit considered when reviewing planned developments.

Optima’s new proposed development would have 108 units and Optima is proposing to make a $1.6 million contribution toward the village’s affordable housing needs.

It proposes to work with Community Partners for Affordable Housing on the project. CPAH President Rob Anthony, in a letter to the village, says he believes CPAH can match Optima’s donation with state affordable housing tax credits, federal HOME funds managed by Cook County and private donations to provide a total of $2.9 million.

Wilmette generally has substantially lagged Evanston in producing affordable housing, although after years of debate it approved construction of a 16-unit affordable housing development in 2018 and last year set a goal of having on average 15 percent of all new multi-family units be affordable — defined as providing housing that costs no more than 30 percent of the household’s income.

Village officials have been looking for ways to encourage more development in the area near Wilmette’s Metra station — what’s referred to as the Village Center — after recently losing two of the businesses that generated the largest amount of sales tax revenue for Wilmette — the Imperial Motors auto dealership on Green Bay Road and the Carson’s department store in the Edens Plaza shopping center.