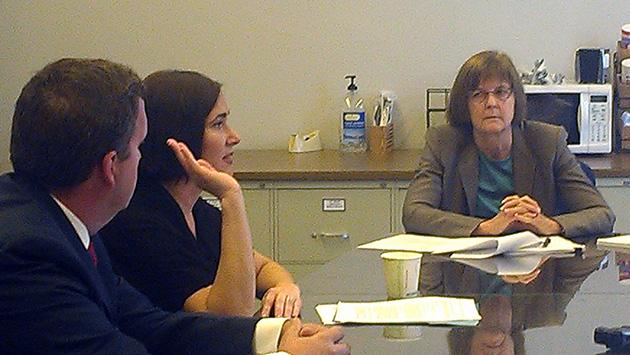 Wine Goddess owner Diana Hamann is worried that if she doesn't make a big change soon, she might be forced to relocate out of Evanston.

The owner of the wine shop at 702 Main St., said big box wine stores, and especially the recently opened Trader Joe's in Evanston, have negatively affected her sales.

Hamann has repeatedly approached the Liquor Control Review Board in the past complaining about business difficulties and restrictions on her operations.

Hamann, along with Sandeep Ghaey, owner of Vinic Wine Co., located at 1509 Chicago Ave., asked the board today to amend their licenses to include on-site wine by the glass sales.

"That would be the difference between life and death," Hamann said.

Fiscally, Hamann said it's not realistic for her business to upgrade to a restaurant-style facility, and she has no interest in serving food, aside from a basic cheese plate.

And she said the community would benefit from this concept with a "female friendly" alternative to a typical bar, a place where knitting groups and book clubs could get together and also enjoy a glass of wine.

"The community already wants this," she said.

The board appeared amenable to the idea only if a cap could be placed on the number of glasses sold.

Ghaey and Hamann suggested that two six-ounce glasses would be a reasonable limit.