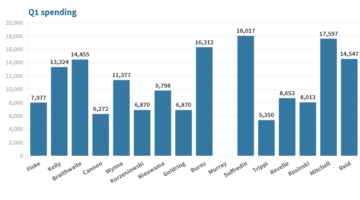 Campaign finance reports show that in seven of the eight Evanston aldermanic contests this month the winning candidate was the one who spent more during the first 90 days of the year.

These figures do not include what candidates spent before the beginning of the year or what they may have spent in the last few days of the campaign before the April 6 vote.

Spending reported ranged from a high of just over $18,000 by incumbent Alderman Tom Suffredin, 6th Ward, to a low of $5,350 spent by his opponent, Katie Trippi.

In the 5th Ward, candidate Carolyn Murray didn’t form a campaign committee for this year’s race. Under state law, candidates who spend less than $5,000 on their campaigns are not required to report their contributions and expenses.

The only candidate who won while spending less than his general election opponent was Devon Reid in the 8th Ward who had substantial name recognition from his current job as Evanston’s city clerk.

The amount of money candidates reported spending for each vote they received ranged from a low of $6 for Trippi to a high of $31 for Matthew Mitchell in his losing bid to become 8th Ward alderman.