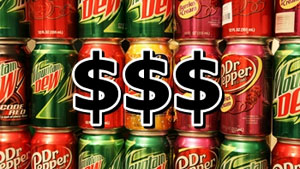 SPRINGFIELD — Health groups say a 2-cents per ounce tax on sugary beverages could raise $1.4 billion for Illinois and save $200 million in health-care costs each year.

SPRINGFIELD — Health groups say a 2-cents per ounce tax on sugary beverages could raise $1.4 billion for Illinois and save $200 million in health-care costs each year.

A new study by the Cook County Department of Public Health said Illinois residents will drink 6.6 billion, 12-ounce cans of soda, sports drinks and other sugary beverages this year.

That could mean big bucks for the state if lawmakers were to enact a 2-cents per ounce tax. The tax would be levied on regular soda, diet soda and other sugar-sweetened drinks. A standard 12-ounce can of soda would cost 24 cents more under the proposed tax.

The study also suggested that the state and private employers would save at least $200 million in health-care costs by imposing the tax.

Elissa Bassler, director of the Illinois Public Health Institute, or IPHI,  said any revenue generated by the tax should be put into obesity prevention and reduction programs, instead of being absorbed in the state's "budgetary black hole."

The IPHA, which explores health issues in Illinois, worked closely with the Cook County Health Department in developing the report, Bassler said.

"I think that it helps to demonstrate what the possibilities are for what a sugary beverage tax might accomplish," she said.

The suggested 2-cents per ounce tax is on top of a 6.25 percent tax — or 6.25-cents on every $1 charged — on sugary drinks imposed by legislators two years ago to help fund the state’s $31 billion capital program.

“I just don’t see, especially in this (political) climate, there being a lot of support for that,” Syverson said.

Syverson serves on the state Senate Public Health Committee, the same committee where a similar soda-tax plan stalled during the Legislature’s spring session.

The report, released Monday, focuses on the health side of the argument, instead of the tax side.

Consumption of sugary beverages now makes up almost 10 percent of the calories the average person consumes during the day, according to the study. Sugary beverages made up just 4 percent of a person’s caloric intake in 1978.

The jump in sugary drinks has led to one in four Illinoisans becoming obese, weighing at least 20 percent more than their ideal weight.

The higher the cost of a 12-ounce can of soda, the less likely someone is to drink the 120 calories of sugar, the study says.

Tim Bramlet, director of the Illinois Beverage Association, which lobbies on behalf of the beverage industry, said a tax on soda would have unintended financial consequences on those who can least afford it.

“This would be a tax on Illinois consumers, especially middle-income and lower-income folks,” Bramlet said.

Additionally, according to the study, it is that exact demographic — middle- to low-income consumers — who are enrolled in Medicaid that cost the state the most in terms of health care and have a higher chance of suffering from health issues related to obesity.

Bramlet said linking sugary drinks to obesity is a bit of a fallacy.

Bramlet added that the non-alcoholic beverage industry directly employs about 7,000 people in the state. If a tax on beverages was enacted, many of those employees could lose their jobs, he said.

If the government wants to help people slim down, it should start by setting a good example, not by increasing taxes, Syverson said.

He suggested excluding soda and other sugary drinks from the list of what people can purchase with food stamps from the state. It’s an idea state Rep. Mike Zalewski, D-Chicago, tried to get through the General Assembly this spring. The move failed.

“If we were roaring right now and the economy were humming along … you could look at a different tax structure for sugary soft drinks. But the way that it is right now, where there’s a backlash to any taxing, with good reason, that’s not the right conversation to be having,” Zalewski said.