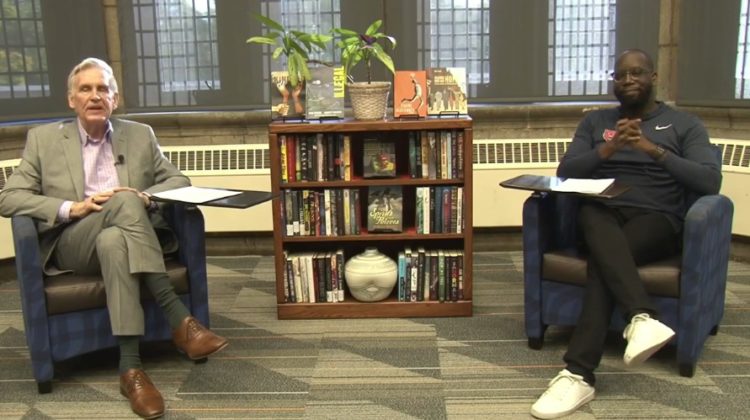 Although he didn’t mention President Donald Trump by name, the comment appeared to be a response to the president’s failure to the condemn the white nationalist group “Proud Boys” during the presidential debate with Joe Biden earlier this week.

“We cannot ever let the haters represent who we are as a people,” Witherspoon added.

The written statement was addressed “To the ETHS Family,” and said ETHS is committed to “being an antiracist school district.” He continued, “There should be no place in this nation where any form of racism, white supremacy, anti-Semitism, or white nationalism is tolerated.”

Two days after the debate, with nationwide criticism and pressure directed against him, the president did say “I condemn all white supremacists.” But he also said Democratic Presidential Nominee Joe Biden should “condemn Antifa.”

Witherspoon did not mention his written statement in this morning’s edition of the “Etown Live” YouTube program. While that show is actually done live during a normal school year, with ETHS on remote education due to the coronavirus, the program is often shot “live on tape” on a previous day.

That was apparently the case with today’s “Etown Live,” which was taped before news broke about President Trump and First Lady Melania Trump being diagnosed with COVID-19.

An ETHS spokesperson told Evanston Now the president’s health would not be a topic for “Etown Live,” regardless of the show’s timing. However, the ongoing coronavirus pandemic is still of great concern to ETHS leaders.

Witherspoon and ETHS principal Marcus Campbell summed up the first seven weeks of remote learning at the school, seven “successful weeks,” as the superintendent put it. He said remote learning is “very different but not substandard.”

Campbell described hard work done by staff and students to deal with the change in learning. “I feel like a duck,” he said. “It looks smooth above the water, but underneath we’re paddling away.”

Witherspoon urged students to “wear your masks.” He reminded the students that teenagers are highly susceptible to the virus, and can also transmit it to others. “By not becoming infected,” he said, “You’re not going to take it home.”

The superintendent said ETHS remains on remote learning because of the ongoing pandemic. While infection rates in Evanston are down, he noted, “We know that can change on a dime.”