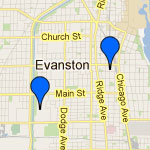 Cmdr. Jay Parrott says the woman told police the incident began about 3:30 p.m. when the youth approached her and touched her buttocks.

When she pulled out her cell phone to call for help, the youth pushed her to the ground, punched her in the face, grabbed her cell phone and fled the area on foot.

The victim, who sustained a minor injury to her face, declined medical treatment.

Later Sunday police were called to a parking lot in the 2400 block of Main Street by a man who said he'd gone there to retrieve his Blackberry phone after someone called him saying he'd found it and would return it for $150. He then gotten into an argument with the caller and his companions about the price.

Parrott says they arrested Christopher Pineda, 18, of 2106 N. Nagle Ave. in Chicago, for taking the Blackberry and also took into custody his 16-year-old companion, who the woman hurt in the robbery identified as the person who'd attacked her.

Pineda is due in Skokie district court at 9 a.m. on March 9.

The 16-year-old, an Evanston resident, has been referred to juvenile court authorities. A second 16-year-old juvenile was released without being charged.

Parrott says police urge any theft victim who receives a call from someone offering to sell back stolen property to avoid the risk of being re-victimized by calling police first and let the officers try to recover the item rather than trying to do it yourself.