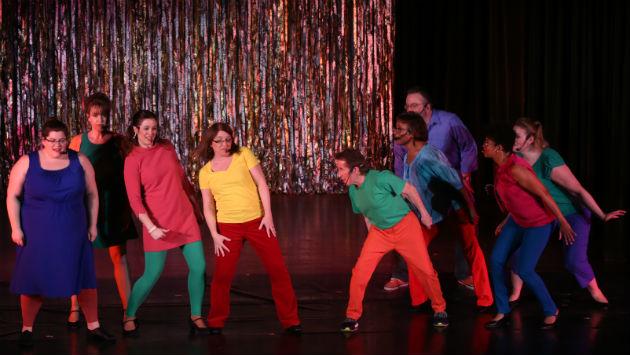 Around 80 cast members will hit the stage dancing starting Thursday to raise money for “Girls Play Sports,” a local nonprofit.

The Woman’s Club of Evanston show, a musical comedy revue full of short dance numbers and skits, will have six performances over the next two weekends. Members of the woman’s club, their spouses and friends have been rehearsing for months getting ready for the event.

“It’s always amusing to see someone’s husband in a tutu,” said Joy Schwabach, a member of the club. This year’s show will parody political tweets, moms on pot and sports bras, among dozens of other acts.

“The funds will propel our small grassroots organization,” says Megan Livatino,  executive director of Girls Play Sports. “We’ll be able to mentor younger girls as well as girls outside Evanston.” Girls are 60 percent more likely to quit playing sports by age 14, according to TeamGPS.org. Encouraging them to play helps them “discover new confidence and pride in their potential.”

Girls Play Sports fosters leadership in girls in grades four through eight through basketball, volleyball and other activities. The program also engages girls in meaningful conversations about current topics.  The Woman’s Club of Evanston donates more than $150,000 per year to local charities and more than 15,000 volunteer hours.

Tickets to the musical review cost $40 and are available at wce-singin-in-the-game.eventbrite.com.