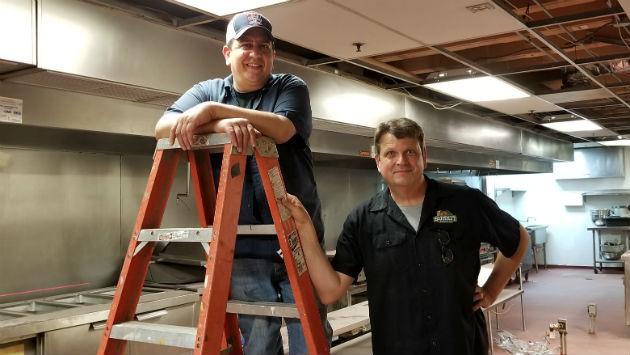 Strom says the schedule’s still a bit uncertain but he hopes to be open in about four weeks at the new site, which will feature a mix of new and familiar fixtures from the old location. 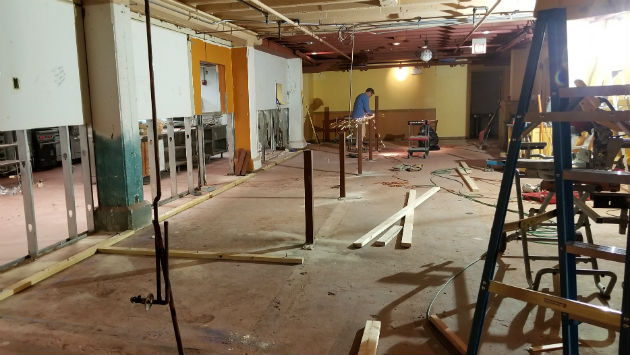 A workman cutting metal posts that will support the bar being relocated from the Sherman Avenue site.

Strom says his team has managed to pull out the bar from the old location and will be reinstalling it at the new site — though with a new back bar made from the wood surface of a couple of bowling alley lanes he located in Paw Paw, Michigan.

Strom says Dave’s, which closed two years ago, has a 45-foot long cooking line, more than twice the kitchen space of the old Prairie Moon, “so we’ll have the luxury of being able to do all the cooking we could before and add some key pieces of equipment.”

(Dave’s owner Dave Glatt, an Evanston restaurateur for more than four decades, has since relocated to a smaller venue, Dave’s New Kitchen, on Noyes Street.)

Strom says the new Prairie Moon will have almost all the menu items that were featured at the Sherman Avenue site, which he’d run for 16 years. “We want people to feel comfortable knowing all the favorites are still there.”

But he also plans to add some new menu options, including pizza and flatbreads and some new seafood dishes. 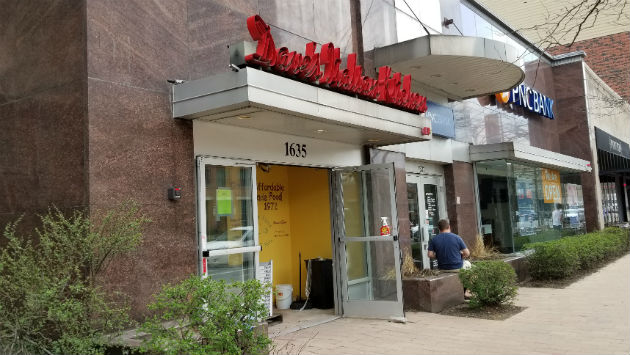 The old Dave’s sign was still up today on the Chicago Avenue facade.

The new location is about the same size as the old Prairie Moon, Strom says. One of the challenges, he added, is that it’s in the basement of the building. But it has an elevator, and Strom is planning to create a glass wall with a view into the restaurant from the front stairway “to get a little more of an airy feel to the place.”

In addition to the bar, the restaurant will have several seating areas, including high-top tables adjacent to the bar, long tables for big groups, conventional two-top and four-top tables in the main dining room and a private dining area at the rear.

Another new feature will be a small stage for music performances.

Strom says the new restaurant will have “a very aggressive craft beer program” — and notes that the owners of Evanston’s Temperance Brewing Company have helped his relocation efforts by providing warehouse storage space for much of Prairie Moon’s furnishings.

He says he also plans to redo the cocktail menu for the new location.

City officials, he says, have been very cooperative with his relocation effort. “They’re motivated to get us open quickly. We’ve been a solid operator, playing by the rules for a long time now.”

The old Prairie Moon will soon be demolished for a new 15-story Albion Residential housing development, and Strom also has plans to open a new restaurant concept on the ground floor of that building once it’s completed.