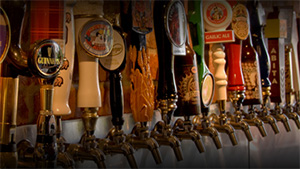 World of Beer swings open its doors this afternoon at 1601 Sherman Ave. downtown.

The franchise features, what else, a huge selection beers on tap and in bottles.

It fills the space that had achieved some notoriety as the proposed site for a Tilted Kilt. which became one of the few establishments denied a liquor license in Evanston in recent years after residents persuaded Mayor Elizabeth Tisdahl that the waitress's skimpy outfits wouldn't be appropriate here.

World of Beers held a "friends and family" soft opening Monday night that was promoted on its Facebook page.