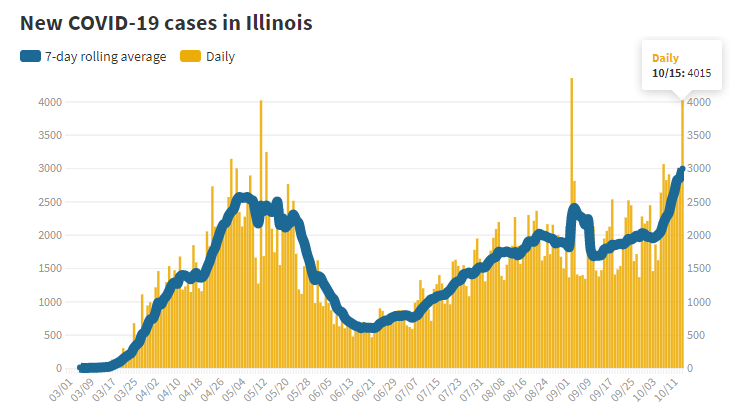 That’s the highest statewide one-day case count of the pandemic so far, topping even the 4,014 cases reported on May 12.

(On Sept. 4 the state reported 5,368 cases, but that total included catching up on a substantial backlog of tests.)

It’s also the highest one-day case count reported by the state for Evanston, topping the 22 reported on May 19.

The Illinois Department of Public Health reported results of 67,086 tests today, up from Wednesday’s 52,669.

The IDPH reported tests of 582 Evanston residents today. It found 23 positive cases for a positive rate of 4.0%, compared to the seven-day average of 2.0%. A week ago, the seven-day rate for Evanston was 1.5%.

The state now says Evanston has had a total of 1,248 cases.

Update 4 p.m.: The City of Evanston’s Health Department now reports 18 new COVID cases among Evanston residents today for a total of 1,250. The highest previous one-day count reported by the city was 27 cases on May 7. The city’s death toll from the pandemic remained unchanged today at 73.

Here are the latest seven-day positive rate for some other communities:

Chicago reported 709 new cases today for a total of 86,801. Its coronavirus death toll increased by three today to 3,002.

As of last night, 1,932 people in Illinois were reported to be in the hospital with COVID-19. Of those, 388 patients were in the ICU and 147 of those were on ventilators.