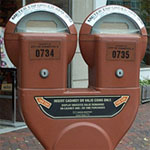 Evanston has cut the number of parking tickets it issues each year by a third over the past decade.

That's what members of the city's Transportation and Parking Committee were told Wednesday night.

During a presentation about the performance of the city's parking enforcement tools and software provider, Duncan Solutions, the committee heard that the number of tickets issued has dropped from 180,000 a decade ago to 120,000 per year today.

That's still 1.6 tickets for every resident, but it's just shy of the 1.67 ratio at Duncan's largest municipal customer — the City of Milwaukee, which has just under 600,000 residents and issues about one million tickets a year.

Assistant City Manager Marty Lyons said the city's enforcement efforts seem to be having the desired effect — that fewer people are violating the parking rules.

A variety of changes in parking regulations — from a reduction in the frequency of street sweeping to the installation of meters that permit four-hour on-street parking in the evenings near some local restaurants — may also have reduced the number of occasions in which residents run afoul of parking rules.

Despite the reduction in the number of tickets issued, the amount the city collects in parking fines has remained roughly stable or increased in recent years.

That's due to a combination of increases in the size of fines and an improvement in the proportion of tickets the city is able to collect on.

Tim Wendler, vice president of operations for Duncan, said the industry standard for ticket collections is 72 percent, but Evanston is now collecting 88 percent of the value of tickets issued.

The city expects to collect $3 million in parking fines this year and has projected collecting $3.45 million next year.

Among other things, the new computers would provide higher image quality photos to make it tougher for violators to claim a parking violation didn't take place.

They'd also be wirelessly connected to the city's computer network so the collectors office would immediately have the information needed so it could accept payments from violators, rather than waiting a day to download the data from the machines.

The proposed new contract with Duncan also includes a reduction in the fee the company charges the city, compared to its current rates.