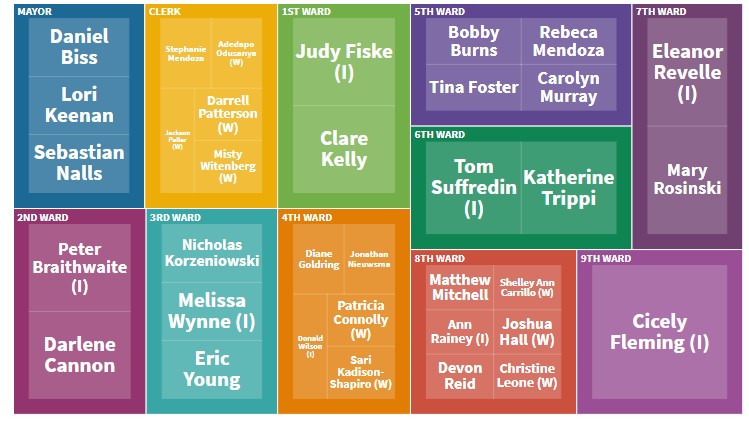 And with Thursday the deadline for declaring a write-in candidacy that would trigger a primary, it’s possible even more aldermanic contests could end up with primaries.

A local referendum in 1992 established a special rule for Evanston’s mayoral election, calling for a primary if there are more than two candidates. And until the write-in candidates showed up, it appeared only the mayor’s race would feature a primary next year.

In the City Clerk’s race, which after Electoral Board actions had only Stephanie Mendoza on the ballot, four more people have filed as write-in candidates.

The write-in candidates include Jackson Paller, a law student at Loyola University and legal intern at the James B. Moran Center for Youth Advocacy in Evanston.

Also seeking the clerk’s job as write-in candidates are Misty Witenberg, who finished fourth in a five-way race for 5th Ward alderman in 2017, and two men whose addresses, online records indicate, appear to be apartments at 1407 Emerson St. — Adedapo Odusanya and Darrell Patterson.

In the 4th Ward the additional candidates are Patricia Connolly, a teacher librarian in School District 65, and Sari Kadison-Shapiro, a graphic designer.

And in the 8th Ward, the write-in candidates are Shelley Ann Carrillo, who lost a challenge to her ballot petitions, as well as Joshua Hall, a member of the Evanston Public Library’s Racial Equity Task Force, and Christine Leone, a clinical social worker.