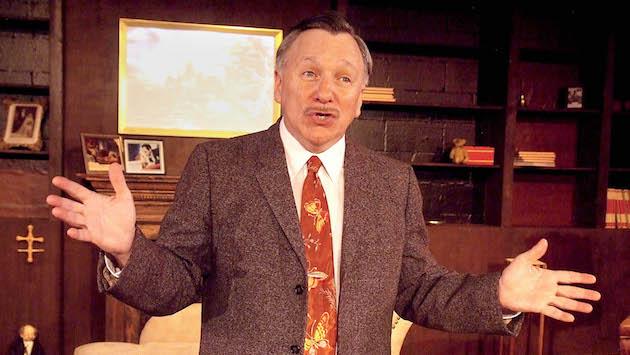 Skokie Theatre’s current production of “Beau Jest” marks a return of the show to playwright James Sherman’s home town. And it coincides with a new chapter in Sherman's acting and writing career.

Sherman, of Lincolnwood/Skokie, wrote “Beau Jest” as a playwright at Chicago's Victory Gardens Theatre over a quarter century ago.

“I wanted to be an actor from the time I was fairly young, and did a lot of school plays at Niles West High School,” continued Sherman. “I started playwriting as a founding member of the Victory Gardens Playwriting Ensemble. Victory Gardens was first starting when the explosion of Chicago theatre began in the 70’s, when Court and Steppenwolf started. I was at Second City, and I had a play called ‘The God of Isaac’ and I sent it to the one person I knew connected with a theatre company, and that was the first play we did.”

“Beau Jest”, Sherman’s best known work, was conceived around the same time, and, through a coincidence following its Chicago run, was reviewed by The Wall Street Journal. “[The critic] produced the show three years on Broadway,” said Sherman. “It’s still getting produced; I saw it in Phoenix, and I’m looking forward to seeing it in Skokie!”

A clip from a film version of “Beau Jest.”

“There’s something about this play that’s very appealing; it’s classic in its structure in terms of a three act comedy,” said Sherman.

The play concerns a young woman trying to impress her parents with her choice of a “good Jewish boy” for a husband. When she introduces a fake boyfriend in order as part of her scheme, she starts to fall for the fake over her own beau.

“There’s something universal in its appeal to families of all backgrounds," said Sherman. "It’s got family values, and is clearly about this young woman and her parents. We all have parents, and the fact is, when I wrote the play, I was going through stuff with my parents. You know you’re a playwright when the stuff that’s going on in your life you think of as a play,” he laughed.

The Skokie production of “Beau Jest” features the performances of an actual mother and daughter in the lead roles, playing into Sherman's familial bcking behind the show.

“I’m completely Jewish; my family name was Shemrinksky before immigrating,” said Sherman. “But you don’t have to be Jewish to enjoy ‘Beau Jest’!”

This play has a life beyond the playwright, and Sherman's pleased with the theatre world’s reception of it. “It’s just kind of out there in the world, and occasionally people find me, and I’m invited to see it,” said Sherman. “It’s always fun to see it; I wrote it a long time ago, and it feels like one of my children is doing well! The workshop is the giving birth, and that’s always interesting, but ‘Beau Jest’ is the one play that’s most well-known and gets the most productions.”

Sherman is proud of his local background, and encourages others to come to Chicago to begin their theatrical careers. “Chicago is the best theatre city in the country, especially when you’re starting out,” said Sherman.

And he'll soon be seen in Evanston in a new work titled “The Ben Hecht Show” about the journalist and writer perhaps best known as the co-author of "The Front Page."

And he’ll soon be seen in Evanston in a new work titled “The Ben Hecht Show” about the journalist and writer perhaps best known as the co-author of “The Front Page.”

“A few years ago, I came across [Hecht’s] book, A Guide for the Bedevilled, in which he relates his journey as an American Jew from his assimilated Midwest upbringing to his social activism in the shadow of the Nazi holocaust,” said Sherman.

“I was inspired to develop my play ‘The Ben Hecht Show’ because I feel Hecht was a brilliant writer who deserves to be remembered, and because the issues he addresses as regards American Jewry, the history of the Jews, and anti-Semitism are richly explored in the text and remarkably relevant to today’s world.”

“The Ben Hecht Show” will be incubated in Evanston as a production by Grippo Stage Company at Piven Theatre opening June 10.

Tickets for Sherman’s “The Ben Hecht Show” are available at www.grippostagecompany.com; opening is Tuesday, June 14 at 8 p.m.